Review: Theirs to Take by Laura Kaye (Blasphemy #4) 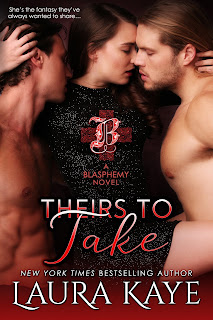 Ooh! I do believe I've just finished reading my favorite Blasphemy book as of yet! Funnily, it's an M/M/F story. Why do I say that? I'm often hesitant when it comes to completely falling in love with a a story that involves a triad, what with me thinking that one pair has to have stronger feelings than any of the two other possible pairings. In Laura Kaye's Theirs to Take, we have best friends and former navy men turned ship builders and restorers--and one of the twelve Masters and co-owners of the exclusive sex club Blasphemy--thirty-seven-year-olds Jonathan Allen and Cruz Ramos, who meet the woman who could either prove to be the perfect one for both of them or the one who could cause the end of their friendship, thirty-year-old Hartley Farren. There's no denying that she's quite curious about what it would be like to be with two men, but wondering about it is one thing, acting on that curiosity is something else. When she learns that Jonathan and Cruz also happen to be into BDSM, Hartley will need to make up her mind and decide if she's ready to be taken by both men--not just her body, but her heart too.

I'm sticking to what I said earlier that this book is my favorite in the series so far. Does that mean that I was convinced these three had the same level of intensity when it came to loving one another? Weeeeell... To be honest, I remained hesitant till the end. There's a point in the story where Hartley's feelings for Jonathan are clearly greater than they are for Cruz, and yes, maybe it's the fact that she met Jonathan first and there was already that mutual attraction going on between them even before Jonathan introduced her to his best friend. I also think Jonathan's and Cruz's feelings for one another were stronger than what they felt for Hartley, especially since they've clearly had those feelings for years. This is where I hesitated in giving this book five-plus stars. However, in everything else, I was easily won over. From the story and character development--Hartley giving in to her desire to be with two men and Jonathan and Cruz's relationship evolving into the "more" it was always meant to be--to Laura Kaye's storytelling, which was as enthralling as ever. It's no wonder Theirs to Take garners five stars. ♥

Purchase Theirs to Take on Amazon | B&N | iBooks | Kobo.