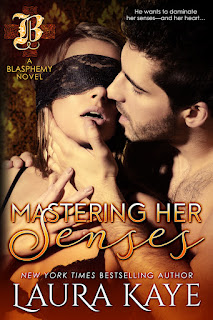 The series may be set in the world of an exclusive club called Blasphemy and so far, the main characters are paired up as Dominants and submissives, but the three stories I've read so far are able to stand on their own merits, each with a creative and original touch to them. In Quinton and Cassia's case, there's a tie-in to the author's Raven Riders series, with Cassia being the younger sister of Jackson "Jagger" Locke, and I always get a kick out of seeing familiar "faces", wondering about those whose stories have yet to be told and wanting to see how those who've had their tales written already are faring. The motorcycle club was a fun backdrop and the race track the MC owns became a turning point of sorts since it had Quinton and Cassia enjoying each other's company outside of Blasphemy, especially since Quinton is looking for more than the run-of-the-mill, round-the-clock D/s arrangement.

Cassia's fears are real, having been brought about by the cave-in that she survived two years ago, and while the usual treatments may not have worked, Quinton tries a wholly different approach. See, this is what makes this series unique. The BDSM lifestyle the characters engage in isn't merely about getting the rocks off and it isn't solely about kink. Maybe there are other standalones and series out there that are like that, but the Blasphemy series is the first one I've come across that's like it. Quinton clearly cares for Cassia and her betterment, and through their play dates within the club, they begin to unknowingly explore and push beyond the original parameters of their agreement of a no-strings-attached thing. There's a hint of drama, but again, there's nothing heavy about this book or those that came before it, and I appreciate that change of pace. Mastering Her Senses is another five-star read. ♥

Bound to Submit (book one) - five stars - My Review