Review: Eyes on You by Laura Kaye (Blasphemy #2.5) 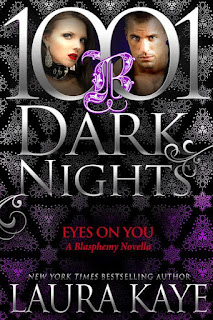 We're back in the world of Blasphemy, the exclusive club that caters to those who prefer varying amounts of kink with their sex. Owned by twelve dominants, this Laura Kaye-penned series has them finding love and trust in their respective submissives. With Eyes on You, we're on to the fourth Blasphemy co-owner, thirty-five security specialist Wolf Henrikson, who rescues thirty-one-year-old florist Olivia Foster from the blind date from hell. This leads to a hook-up that has both Wolf and Liv absolutely hooked on one another. When they share one particular kink with each other--Liv is into exhibitionism and Wolf is into voyeurism--Wolf wants to be right by Liv's side as she explores this side of herself. Liv has trusted Wolf with her darkest secret, but can she trust this man with her battered heart?

This was a fun quickie read that had the female main character exploring a part of her sexuality that she's been hesitant to fully acknowledge, no thanks to her former fiancé. Liv grew in confidence as the story played out, thanks in large part to Wolf reassuring her that her penchant for being watched while engaging in sexual acts was something that she should never have been embarrassed about. These two connected and thank goodness we didn't have to waste time having them pussyfoot their way to falling in love. We also get to see a few of the other couples who've been featured in the series, though I confess that while I remember Isaac and Willow Marten in Hard to Serve, I couldn't remember if they ever got their story told in a book of their own. If they have, feel free to let me know via a comment! If they haven't, I hope they do in the future! Eyes on You is another five-starred read. ♥

Purchase Eyes on You on Amazon.