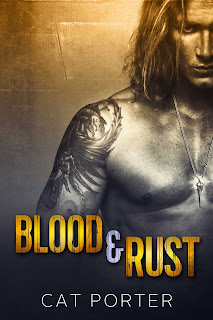 Note: This ARC was provided by Sassy Savvy Fab PR in exchange for an honest review.


“Here’s the thing, Tania. I like you as a person; I like you as a woman. I don’t want half of you, parts of you. I don’t want to just have a good time, have you on my arm here and there, have a laugh at a party over a beer, fuck you, zip up then walk away.” I entwined our fingers, pulling her closer in to me. “I want you to want me like I want you. I want you to feel like you can’t get enough of me, just like I can’t get enough of you. I want you to feel that you can’t claw your way in here deep enough.” I bashed her hand into my chest. “Because that is how I fucking feel about you.”


Oh, Cat Porter. You're ability to never disappoint me knows no bounds. From the moment I read the three available books in the Lock & Key series at the end of January of this year, I was a goner. Your writing pulls me into the motorcycle club world of the One-Eyed Jacks and their women, as well as their fragile allies and their formidable foes, and it's a world filled with conflicting emotions, thoughts, and desires. With Lock & Key and Random & Rare, we're introduced to Grace Quillen and the two men in her life: Dig Quillen, her first love, and Lock LeBeau, her last love. Then there's Boner Giddon and Jill Loughlin in Iron & Bone. Now, after what felt like forever, fans of the series finally get the story they've been waiting for, that of Butler Matthiessen, a supporting character in all three of the previously released novels, though labeling him as "supporting" doesn't seem sufficient for the role he's played in overall story arc within all the four published books. You may think you know all there is to know about Butler, but everything you thought you knew barely scratched the surface. This man is a complexity that isn't looking for anyone to decipher or crack him like some sort of code. But once you meet Butler, you'll want, no need, to know him.

Markus Matthiessen ceased to exist when his brother was taken away from him so abruptly, forcing him to leave the life he knew. He found an opportunity at a new life when it was offered to him and the One Eyed Jacks became his new family and later became Butler. Time and again, he's fallen victim to his own selfishness, thinking of the immediate satisfaction of sex and drugs and not the lasting consequences. He's loved and lost more than once, has been forced to take the punishment of his club several times before. Now, he's ready to return to Meager, South Dakota, and in his mid-forties, Butler is no longer the hedonistic, cocky man he once was. When he crosses paths with a familiar face and realizes Tania Reigert, too, is on her way back to Meager, they decide to make the journey back together. An unexpected friendship quickly develops, with Butler proving to be insightful and easily but solemnly showing how much he understands Tania and her passions and what she's looking for in her life. At forty-three and moving forward with her divorce, Tania is ready to pursue something she's always wanted to, but as much as she wants the enigmatic biker to be part of the pursuit, too many secrets may crush them permanently.

This book was one that I had been anticipating reading from the moment I knew it was going to be part of the series months ago. Butler is just one of those characters who's always there and you can't resist his pull, making you itch to learn his story and how he became the man that he is today. He's evolved over the first three novels, but you only get the full impact of the changes he's undergone in this fourth novel, because now you get the full story, unadulterated, skeletons, scars, and everything in between on display. For all his misguided good intentions and his full-on blunders and missteps, Butler's tale is one of redemption and he goes on to earn it true Butler fashion. When you learn his entire life story--a combination of woe, whoa, and wow--your heart can't help but squeeze in empathy and break for what he has to go through with each loss he endures. He found his footing on his own, but with Tania, it was as if the time was finally right for him to have his own happy ending. There's a point in the story where Grace speaks to Tania about Butler and I couldn't help but cry over their conversation. Why? Because Butler, for all his faults, was loved and knew how to love. Blood & Rust is a five-plus-starred MC romance at its finest. ♥

Read my reviews for the Lock & Key series: