Review: "Make It a Double" by Sawyer Bennett (Last Call #2) 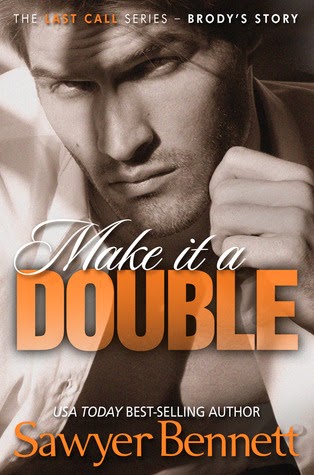 Five years ago, Brody Markham was living a storybook life: he was in medical school, had a loving and supportive family, and was in love with his girlfriend. One reckless night changed all that and Brody was sent to prison for vehicular manslaughter. Now he's free but the years he spent behind bars have changed him, making him a shell of the young man he once was. He's distant and carries with him a great deal of anger and guilt. His family and closest friends have been understanding and supportive but he doesn't believe himself worthy of their trust or faith.

Alyssa Myers may come from a moneyed family but she isn't spoiled nor does she feel entitled. Rather than hobnob with the rich and privileged, she would rather spend her time managing The Haven, a non-profit, no-kill shelter for animals. She puts in more effort than one would expect from someone who could be living in the lap of luxury but she wouldn't have it any other way. Estranged from her mother and trying to dissuade an obsessive ex, Alyssa prefers the company of her best friends and believes in second chances, whether it be for her animals or people.

Brody and Alyssa have known each other for years but when Brody's twin suggests that he volunteer at The Haven as part of his community service, Brody outright refuses and calls Alyssa a "snotty, rich bitch heiress," a statement based on his personal dealings with a particular person. But when Brody discovers that Alyssa is nothing like the girl he accused her of being and Alyssa finds out the secret that Brody's been keeping, the connection between them is solidified with mutual trust and respect plus an attraction that neither of them can further deny or ignore.

When their respective pasts intrude on the fragile peace and contentment they've begun to enjoy, Brody and Alyssa will have to decide just how far they're willing to go to protect one another. Will confessing the painful secret Brody's been keeping for the past five years to those closest to him finally bring him the forgiveness he seeks or will it completely break the already fractured relationships he has? Sometimes, the most difficult person to forgive is yourself and learning to accept the help and assistance of other people may be your first step on the road to redemption.

Make It a Double is the second book in the Last Call series by Sawyer Bennett and shines the spotlight on Brody Markham, the quiet and brooding twin that was incarcerated for five years for felony death by vehicle. Upon his release, the good-natured, easy going son, brother, and friend was gone, replaced by someone who did not seem to want to re-connect. Then you have Alyssa Myers, a kind-hearted heiress who provides abandoned and abused animals a second chance at life and sees Brody as someone deserving the same kind of opportunity, if only he would take it.

I loved this story about a convicted felon who was once seen as the golden boy of his family and his community and the rich girl who could have anything she wanted but chose to live a simple and more meaningful life. When Brody made his disparaging remark regarding Alyssa in book one, On the Rocks, I was shocked and would have slapped the person who'd have the nerve to make the same comment about me. Alyssa's understanding was beyond measure and the fact that she never held that humiliating moment against him, showing a maturity beyond her years.

The book surprised me because the author could have taken a certain route in resolving the secret that Brody was keeping but took it in a direction I didn't expect. I felt a bit like Alyssa did when that happened but I won't get into it here because I don't want to spoil it for any bookaholics who have yet to discover this addictive series. ^.^ The characters were memorable and I appreciated that there wasn't any insta-lust or insta-love going on. Their friendship evolved into something more and went through trials and challenges along the way. Make It a Double gets five stars. ♥

Grab a copy of Make It a Double on Amazon | B&N.