Review: "Jack and Djinn" by Jasinda Wilder (The Houri Legends #1) 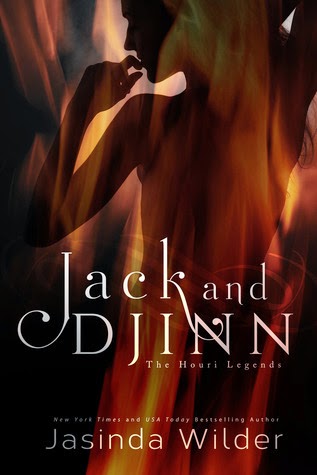 A body burned to a crisp, leaving behind charred remains, greets Detective Carson Hale outside the MGM Grand in Detroit. Nearby is a large pool of blood but no body, leaving Carson to believe that there were two victims involved in the crime. When the body is identified as Benjamin Wade, a former Marine, the detective begins an investigation that leads to a woman name Miriam that's difficult to find and a story of abuse and something much more than logic or science can readily or easily explain.

Miriam al-Mansur has never had much luck with men. Her former boyfriend was physically abusive and her current one is just as bad, especially when he's drunk. She wishes she could just leave him but she knows he'll just find her and drag her back with him. She doesn't fight back but she has noticed that her body's been reacting strangely to his abuse: she feels as if she's heating up from the inside out, plus objects have materializing out of the blue and she's pretty sure it isn't simply her imagination.

When he passes by a woman being hurt by a man, Jack Byrne steps in and rescues her. She obviously needs more help than he can give her but she refuses to go to the hospital. From then on, there's something about her that fascinates him and he feels the need to protect her from her abusive boyfriend. Jack can't begin to understand the kind of fear that Miriam lives with but with the encouragement of his grandfather, Jack vows to do all he can to help her, even if she keeps pushing him away.

Miriam recognizes that Jack is very different from Ben and as much as she wants to be with him, she fears that Ben will go after Jack and hurt him or do something far worse because she knows that's what he's capable of. But as the heat within her burns to scorching levels, Miriam realizes that putting a stop to Ben, his abuse, and the fear that he has sown is on her and it may take more than simply getting up and leaving him. Will it be too late for  her to save herself or will Ben's rampage lead to more loss?

Jack and Djinn is the first book in The Houri Legends series by bestselling author Jasinda Wilder. I went into this blind but did know that it was a paranormal romance and the title itself gives a clue as to what the paranormal element actually is. There's also a Wikipedia explanation provided for those not familiar with what a djinn is. This was different from the past Jasinda Wilder books I've read and my curiosity plus my reading experience when it comes to her work made this easy for me to say "yes" to.

It takes awhile before the explanation for what's going on with Miriam internally and is manifesting externally is given but it does have the feel of a slow burn (pun intended), possibly in hopes of making the reader be invested in the story and the characters. The thing is, there was just this disconnect that I felt when it came to Miriam, though I did feel empathy for her. Both Miriam and Jack having a special, magical power also seemed a bit of a stretch, though that could explain their instant connection.

If you're looking for an interesting paranormal romance to read, I suggest you give Jack and Djinn a whirl. The second book is out today and features Detective Carson Hale and Leila Najafi, who was briefly introduced in the first book. Abuse is a painful subject, especially for those who have experienced it, so be forewarned that there may be potential triggers in the book. All in all, this was a pretty good read and left me wanting to see what was in store for me in book two. I'm giving this 3.5 stars out of five. ♥