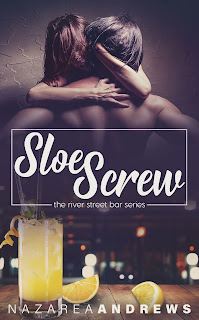 There's something about small-town romances that appeals to me, which is ironic since I've always lived in the city. The River Street Bar series is my second small-town romance series from Nazarea Andrews, and once again, she's got me addicted to her stories of the townsfolk and their far from boring lives. In book three, Slow Screw, we have Vivian Fitzpatrick and Matteo Soto. For a decade, Vivi put her boyfriend first while putting the dreams she's always had on hold. When he ups and leaves with nary a glance her way, she decides to do something she hasn't done in a while but knows she's more than good at--phone sex. With her job as a dispatcher for the local police department, her moonlighting gig working the phone sex line, and a solid group of friends, however, don't make up for her broken heart. Maybe the distraction of the rookie on the force will suffice, but Matteo has demons of his own. He's made it out of the military in one piece and has moved to be closer to his late best friend's family, but he suffers from PTSD and struggles with life as a civilian. Could these two find what they're looking for in each other's arms?

I liked the first two River Street Bar books--Fireball and Rusty Nail--but this third one felt more put-together and had that a more fortified layer of angst and sexual tension. I'm not saying that the other books didn't have that feel or had those elements; they did, but there was just an additional bit oomph that book three had. I liked Vivi's and Matteo's back stories, making them already interesting to begin with, but those tendrils that tie them together made their couplehood something that I was highly anticipating. I seriously wanted to smack Vivi's ex because he clearly didn't consider her at the same level of importance that Vivi did him. She deserved to have someone better and there was something about Matteo--damaged and all--that felt right. That doesn't mean he was perfect and neither was Vivi. They simply clicked, and there weren't these easy fixes to the issues they were dealing with was due to years of exposure--Vivi to her boyfriend who never saw her as worthy and Matteo to having seen death and destruction. Sloe Screw was a wholly entertaining read that made me cheer Matteo and Vivi on. It gets four stars. ♥

Read my reviews for the River Street Bar series: