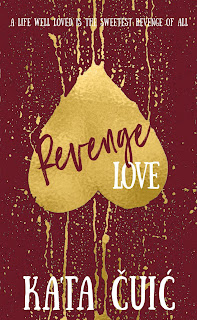 Kata Čuić is a new-to-me author and Revenge Love is my introduction to her writing. This college romance features college seniors Emma Hastings and Jason Guild, best friends who bicker and banter but both of whom consider their friendship important to their sanity and survival. Emma has been on a quest to achieve a level of acceptance and popularity in college that was always beyond her reach when she was in high school. On the other hand, Jason knows all too well that he'll never be one of those that girls will fawn over and that guys want to hang out with. He's accepted his lot in life--how can he not when it's on constant display every single time he looks in the mirror and when others look his way. She's trying to hard to fit in, and he doesn't care to try it all. Everything changes one night, and with Emma's sorority sister Rosie Kavanaugh and ex Kieran King in tow, revenge proves to be more bitter than sweet, especially when one lie too many comes to the surface and the villain could very well become a hero.

This was an interesting new adult (NA) read in that the story line was one that I felt was creatively fresh and intriguing. The story did have a tendency of meandering along at times, making the temptation to skim all too real. Where the book held my attention, however, was where the author's writing was strongest, and while Emma was, at times, difficult to actually muster a fair amount of sympathy towards, Jason was a whole different beast--pun unintended because this book was so not a retelling of the Beauty and the Beast fairy tale. The guy had my empathy, but he also had a great deal of affection and admiration. Was he perfect? Hell, no, but there was something about him that made him very real--an honesty and fortitude that was lacking among the rest of the cast of characters, what with a lot of them being all about persona and not personality. While Revenge Love was much longer in terms of length than I felt it had to be, it was a pretty good read in the end. This receives four stars. ♥