Review: On the DL by Laramie Briscoe (MVP #1) 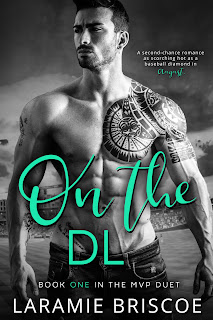 Second-chance romance? Check. Sports romance? Check. First in a duet? Check. Penned by Laramie Briscoe? Check. On the DL doesn't just want to hit a home run but goes for the much coveted grand slam and nearly does, and it gets the author's MVP duet off to a great start. If you're familiar with Briscoe's Moonshine Task Force series, then you may recognize Slater Harlow, aka Savage, as the college roommate and best friend of Caleb Harrison, aka Cruise. His love story basically starts when he was a high school sophomore, having fallen for Malone Fulcher, and it ends after they graduate, engagement abruptly ended and all plans for a future together thrown away. They pursue separate professional dreams and ten years later, they've made them come true--his in Alabama, with him one of the biggest stars in the sport of baseball and hers in New York, with her handling the public relations of a major client. One terrifying injury and one unexpected firing later and Slater and Malone find themselves back in Willow's Gap, Georgia. Is their small hometown big enough for two former lovers and a second shot at true love?

Being on the disabled list and getting fired prove to be the impetus that have Slater's and Malone's paths crossing again, and I must admit that their breakup a decade prior was really rather heartrending. Yes they were eighteen-year-olds but heartbreak is heartbreak at any age, especially given that these two were engaged, very much in love, and had plans to be together. A whole truckload of lack of communication and ten years later, and they were back in the same place with nowhere else to be. I liked that there wasn't this mad rush for them to kiss and make up. There was a hint of wariness and remaining anger, but the bitterness that I've come to expect from this particular trope wasn't as prevalent, and thank goodness for that. I enjoyed seeing these two reminisce while also getting acquainted with the people they are now as adults. Of course, this happens to be the first in a duet, so it does end in a cliffhanger, but it's only a two-week wait between books, so it isn't frustratingly and overly long a wait. Overall, On the DL was a 4.5-starred start to this new duet and has me looking forward to the release of MVP. ♥

Purchase On the DL on Amazon.