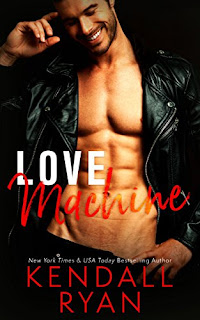 If she wants me to be her personal love machine, let's face it, I'll jump at the chance.

But we're just friends—always have been, and hopefully always will be. I know she's married to her job, and she knows I'm not interested in settling down. Neither of us wants to fuck up all the good things we've got going on, especially not our friendship.

Keaton Henley may be great at selling software, but it seems that she's got a thing or ten to learn when it comes to the art of seduction. After a failed attempt at cucumber fellatio during her best friend's bachelorette party, Keaton thinks that she needs a few lessons, especially if she hopes to have a far more stellar sex life than the current lackluster state it's in now. The best person to give her pointers could very well be one of her other closest friends: Slate Cruz. The guy never seems to have any problems keeping his bed warm and never lacks for any sort of female attention. A few lessons should suffice, and she's more than prepared with her tables and charts and ready to take down notes. However, Slate's teaching method is very much hands-on, and there's one thing in particular that he and Keaton pick up on quickly: they've always clicked as friends, but it looks as if they more than click sexually  as well. But as weeks go by and the more intimate these two best friends go, there's one lesson that they could be forced to figure out all on their lonesome: how Slate'll protect his heart from breaking over Keaton and vice-versa.

Welp, stick a fork in me because I'm done! I do believe I've just found my new favorite Kendall Ryan read and will you look at that—it's my favorite trope: friends-to-lovers! Love Machine is all about Keaton Henley needing to learn how to spice her sex life up, and her teacher comes in the form of her hot best friend, Slate Cruz. Now, that sounds like a host of other friends-to-lovers stories out there, but this one's got a bit of that extra something that makes it a far better read than most. Keaton and Slate were friends. PERIOD. There wasn't any sort of crushing in secret. Sure, they've both noted just how hot the other may be, but no pining at all, and thank goodness for that. I don't necessarily mind it, but again, with so many books that fall under this sub-genre, I keep an eye out for the uncommon stuff. Then there's one particular part of the story that had me sitting up and paying attention. Yeah, you're not getting it out of me, and maybe it's just me it affected the way it did. The fact that Love Machine has an adorable story, a couple of fab characters, great writing, AND it affected me positively? Hello, five-plus-star rating. ♥