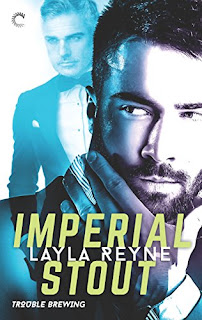 Note: An advanced reader copy (ARC) was provided by Carina Press via NetGalley.

“Is this going to push you over the line? Break one rule, break them all?”

Cam's heart stuttered in his chest. Nic was hesitating out of worry for him, over what he'd said the other night at the house. Cam was nowhere near good enough for this man, probably never would be, as dirt-broke and as screwed up as his past had been, but fuck if he could hold himself back now, the chemistry between them winning out over good sense.

“I broke the rules the minute I laid eyes on you, Dominic Price.”

I admit it: I was damn nervous about reading Imperial Stout. Not only was this going to set the pace for the Trouble Brewing series, but it was also the spin-off to one of my all-time favorite series, Agents Irish and Whiskey, so the stakes were high. Layla Reyne, however, didn't give me what I was hoping for. Nope, she gave far more. I started reading...and kept going...and fell in love with the action, suspense, mystery, and yes, the romance. Cam Byrne and Nic Price are NOT Jamie Walker and Aidan Talley. The latter and their story was extraordinary, and while they are tied to the former through friendship that's made them part of one another's chosen family, they're too separate sets of couples. Aidan and Jamie's tale may have thrown down the gauntlet, but if this series starter is any indication, then it looks as if Nic and Cam's addictive story is going to be an unstoppable force to be reckoned with.

Assistant US Attorney Dominic Price knows how to come up with a compelling argument to win his cases. He's earned the respect of many and the ire of some. From Navy SEAL to prosecutor, Nic's earned the reputation that he has, but at forty-five he finds himself enjoying the "down time" his craft brewery provides--even if it has him spending hours doing paperwork. His attraction to FBI Assistant Special Agent-in-Charge Cameron Byrne, however, is more of a distraction--or maybe temptation would be a better way to describe Cam. Unfortunately, the last thing either one of them needs is to be anything less than focused, what with their joint operation in danger of imploding, no thanks to their confidential informant getting kidnapped and the US Attorney wreaking havoc on their plans. When the shady dealings of his father threaten Nic's life and Cam is forced to bring to the surface a part of himself that he's kept buried for years, will either of them be left standing when all is said and done, or will these two independent men finally realize that they're more formidable as a team, professionally and personally?

There were parts in this book that literally had me on the edge of my seat. The twists that the author had lying in wait made this an even more exciting read than it already was to begin with, even if I did figure out who was behind the heist that Nic and Cam were trying to put a stop to, since the heist wasn't the only thing that had Nic and Cam on their toes. While readers and fans only got snippets of them in the Agents Irish and Whiskey series, we start to get a better idea of who they are, given glimpses into their respective pasts that make it clear enough that they've experienced and survived their share of adversity and loss as well as quite a bit of guilt, although that last part is one I suspect will be explored further as the series moves forward. I loved the chemistry between both men but these two have differences that I'm curious as to how those will affect their developing relationship in the future books. The case that Nic and Cam handle here is resolved, but like Aidan and Jamie before them, there are still loose ends given that there is a story arc that'll run throughout the series. We've got about a two and a half-month wait before book two, Craft Brew, and I'm already curious as to when book three will be released. I'm THAT enthusiastic over Trouble Brewing. Can you blame me? After all, Imperial Stout is a five-plus-starred series starter. ♥