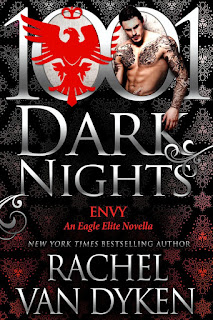 Note: An advanced reader copy was provided by the publisher via InkSlinger PR.

Rachel Van Dyken is back with the latest addition in her highly popular Eagle Elite mafia romance series, and it's a novella about an assassin who has pledged his life to the five remaining families and a nanny who is far more than what may seem to be. Envy is the story of twenty-one-year-old Renee Cassani and thirty-year-old Vic Colezan (which is what he's called in the blurb but he's called Vic Abandonato in the actual story, so I'm not sure which between the two he really is). With the summer winding down, Renee is counting the days until she'll be back in college, finishing up her final year. Being the nanny to the children of the mafia bosses hasn't exactly been a walk in the park. The constant reminder of the people she's surrounded by day in and day out, and the fact that her own father is part of it isn't something she could ever get used to. Among all the men walking around with guns tucked in their holsters, there's one in particular, however, that sparks a feeling of awareness in Renee. He's quiet and brooding but Vic's watchful eye is not just limited to the bosses and their families--it's on the beautiful nanny too.

First things first: this novella can absolutely be read as a standalone. Yes, there are characters here whose stories have already been told in the earlier novels, and while they may pique a new reader's curiosity, this new book is really about Vic and Renee. One of my favorite things about it was the intensity that Vic seemed to always have. He was quiet but that silence he tended to have belied his vigilance when it came to the people he cared about most. He's quite an enigma for a good portion of the book, but once those layers are peeled back, Vic's history was a surprising one yet it highlights just how interesting of a main character he is. Then there's Renee who has an innocence and naivete to her, but a lot of it, I think, was due to her not really wanting to believe everything that she already knew about being part of the mafia. She and Vic didn't seem to have a whole lot in common, but there was a connection between them, and all it really took was Renee recognizing its existence and Vic finally giving in to it. Theirs was a story that was complicated and at times heartbreaking, but so worth reading. 4.5 stars for Envy. ♥