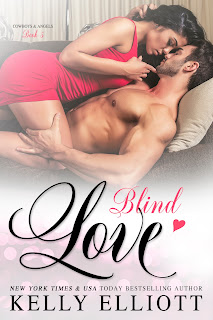 Second chance romances can be a mixed bag; I've loved some and found others lacking. When I read this particular trope, something needs to click between me and the book I'm reading. With Blind Love, the fifth in bestselling author Kelly Elliott's Cowboys & Angels series, I was a couple of chapters in and was worried the book was going to go down the same way as too many other second chance romances have. I'm not a fan of one person in a relationship making a drastic move in order to set the other person free to pursue their dreams. It's manipulative in the form of trying to appear selfless, although if we're totally being honest here, there's a whole lot of selfishness and possibly even fear involved. But I digress... What I'm basically saying is that Blind Love turned out to be a revelation, one that I relished by the time I realized that it wasn't headed in the direction I first thought it was.

This fifth novel was about Tripp Parker, the second eldest among the Parker siblings, and Harley Carbajal, his first love who broke his heart after confessing that she not only didn't share the same enthusiasm for the future that Tripp had for them but that there was someone else who had turned her attention away from the boy she'd loved since high school. Fast forward ten years later, and thirty-one-year-old Tripp's life plan continues to move forward--his law practice is doing well and he's announced his intention to run for mayor. He's also dating a single mother whom he cares about and that his family seems to like. But then Harley returns to Oak Springs, and trying to NOT think about his ex--the girl he was going to ask to marry him after they graduated from college--becomes increasingly more difficult with each day. Will the new town vet stir up old feelings or is Harley a decade too late?

I love it when a couple that was once very much in love and then separate and then find themselves in circumstances that force them to be around one another don't immediately do the whole exchange of apologies and then jump back into a relationship. The struggles mean a great deal because, at least as far as I'm concerned, both parties show that they're in it to win it, regardless of how difficult it may be. With Tripp and Harley, there was Tripp's current girlfriend, Harley's lie that broke them up, and needing to earn that trust once again. As is par for the course with this series, there was angst, but it's also nicely balanced out with lighthearted humor, especially coming from Tripp's and Harley's families and a pup named Hemi. The only things stopping me from giving this five stars is the abrupt resolution of certain complications plus the whole perfume thing since perfumes DO expire. The latter one may seem shallow, but it was a detail that bugged me. Still, Blind Love ended up as a sweet 4.5-star read. ♥