Review: The Ballerino and the Biker by Rebecca James (Hedonist #1) 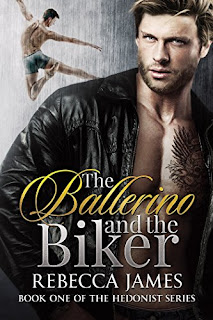 Rebecca James is a new-to-me author and her Hedonist series, which is set in New York and features a mostly laid-back motorcycle club known as the Hedonists, was my introduction to her writing. Book one, entitled The Ballerino and the Biker, is about a nineteen-year-old ballet dancer named Morgan Wentworth and a twenty-seven-year-old member of the Hedonists MC named Zeke Ivers. Morgan's return from Milan was supposed to be the perfect opportunity for him and his estranged older brother to forge a closer relationship after Jake chose his club over his parents. But instead of Jake welcoming him back to New York, Morgan is saying goodbye to him, laying the only family he had left to rest. He also soon learns that his life is in danger, and it looks like Zeke will become his keeper for as long as he's under the protection of the brotherhood Jake loved and trusted. He refuses to let this stop his dreams of dancing with the Manhattan Ballet, so he'll learn to deal with the surly biker; however, it's Zeke who's having a time wrapping his head around the fact that a straight guy like him has a thing for a gay guy like Morgan.

This was a surprisingly far heavier read than I expected it to, but that doesn't mean that it's all angst, all the time. The connection between Morgan and Zeke was subtle, and I'm not counting the fact that Zeke did physically react to the closeness of Morgan when they first met. I'm talking about the more emotional aspect of their connection. Zeke being straight and his own experience with homophobia at the hands of his father and one brother had him denying his attraction to the younger man, so a lot of the book had to do with him deciding whether or not he would pursue said attraction. There's also side stories that have to do with Morgan fully taking control of the million-dollar family business in conflict with his wanting to become a primo ballerino as well as a rival club coming after Morgan in retaliation for something connected to Jake's death. Overall, I did enjoy reading the story and getting to know the cast of characters. There was a bit of repetitiveness and the pacing was a bit slower than I would have liked, but The Ballerino and the Biker was a good start to this series and garners four out of five stars. ♥

Purchase The Ballerina and the Biker on Amazon.