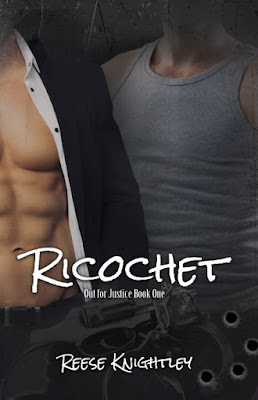 About Ricochet
WITSEC victim Noah Bradford knows secrets that could get him killed, and staying hidden seems like a good plan. What he didn’t plan on is losing his heart to a man who is sworn to protect him.

Battle scarred US Marshal Robert “Mac” Mackenzie has a job to do, and guaranteeing the safety of Noah Bradford is at the top of that list. Mac will do whatever it takes to keep Noah safe, even if it means walking away.

Mac and Noah, brought together during extreme circumstances, have been separated by evil. It's been six years, give or take, and Noah is coming for vengeance against the men who killed his mother. He's on a collision course with Mac, who has no idea of the man Noah has become. Sparks fly and the heat sizzles when these two powerful men are reunited, but will they survive the passion the past created? 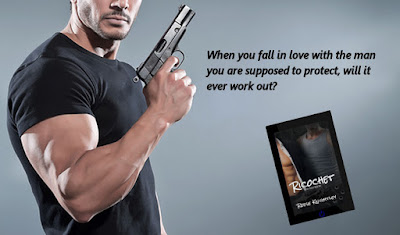 Read my 3.5-starred review of Ricochet. 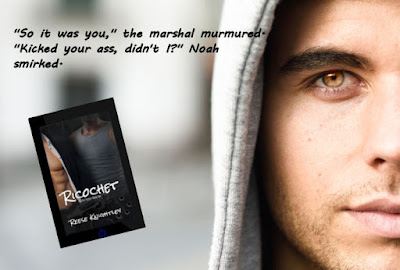 An Excerpt from Ricochet
Noah sat watching Mac through the windshield of the SUV. Mac had gotten off the freeway before pulling over next to a roadside stand. The man got out and bought a bunch of flowers and although Noah wondered why, he didn’t ask.

A few miles down the road, Mac pulled into a cemetery.

“I’ll be right back,” the marshal said after parking the SUV. Mac got out and walked across the grass, avoiding headstones until he stopped before one and placed the flowers in the vase in front of it. He looked so totally alone, standing strong against the wind.

Mac’s lips moved as he talked to the grave, and Noah could tell this was someone important to Mac by the way his fingers lingered on the gray headstone. Something about Mac standing alone near the grave caused a tightness in Noah’s chest, and he found himself leaving the warmth of the SUV.

Mac looked up when he shut the vehicle’s door, and their eyes met across the distance. Noah didn’t approach. He just wanted Mac to know he was there if the man needed him. A moment later, Mac approached and they both silently got back into the vehicle.

“Was that a friend?” Noah asked tentatively.

“Family,” Mac said brusquely, and Noah turned to glance out the window, swallowing the lump in his throat, and then looked back at Mac.

His gaze was drawn to the dark-haired man with a sexy five o’clock shadow growing along a chiseled jawline. Although he couldn’t see it from this side, the scar running down the left side of the man’s face gave Mac a dangerous look. In the close confines of the vehicle, Noah was very aware of the power in Mac’s corded arms and shoulders. The muscular chest he’d been held against during the escape drew his eyes time and again.

Mac took a series of side streets before getting them back to the safe house. Sitting on the couch, he tracked the marshal with his eyes, watching as the man turned on the television and selected a station. Jake and Jenny were on their way back but had stopped for a bite to eat.

He found himself staring at Mac’s trim hips. His eyes darted away before returning after a brief moment to lock on Mac’s ass. Freaking hell, no way would a man like Mac want him. Yet that didn’t stop him from wishing. He would have given anything for Mac to look at him and see someone other than a needy WITSEC victim.

Mac stalked back toward him, and Noah jerked his gaze to the television. Despite feeling displaced and scared, he felt better with Mac nearby. The man hadn’t said a word since they’d returned from the cemetery, and Noah couldn’t figure out what he’d done wrong.

Mac dropped onto the couch next to him. The marshal’s scent reached his nose, and his overactive imagination pictured Mac’s scent on his body and how that would possibly work. His pulse suddenly hummed in his ears. The man’s weight dipped the cushion, and one massive thigh innocently brushed against his leg. Instant arousal hit, and Noah lifted one of the small decorative pillows to clutch in his lap.

Mac scowled at him, and Noah shifted beneath the somewhat angry stare. Again, he wondered if he’d done something wrong. The normally kind man was missing, and in his place was an irritated stranger.

The marshal’s phone rang, and Mac’s eyes narrowed before he answered it.

“If you have stuff to do, I’m fine on my—” Noah stopped when Mac shushed him with a stern look.

About Reese Knightley
A native Californian, Reese Knightley spends her time creating stories from the characters rattling around in her head, which has caused her to talk to herself on more than one occasion. Her love for reading mystery, fantasy, action and adventure, and contemporary romance led to her love of writing, which keeps her up day and night. Next to writing comes her love for coffee and wine, in no particular order.

When not writing, Reese can be found working a part-time job where she day dreams of writing. She loves to hear from her readers and can be contacted at Reeseknightleyauthor@gmail.com. 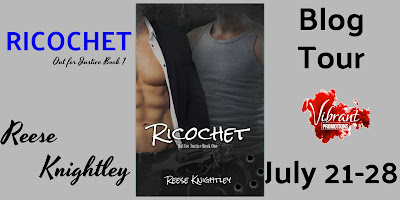