Book Spotlight: A Change of Pace by Freya Barker 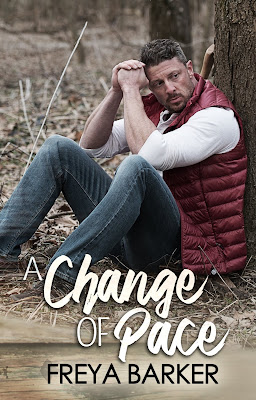 About A Change of Pace
Once a man who lived by the letter of the law.

Newt Tobias will do anything for his little girl. Even take early retirement, sell his city home, and move to cottage country, hoping that the simpler life will provide a better balance for his troubled teenage daughter.

Yet, not long after they’ve settled, he finds himself toe-to-toe with a stubborn, fiery tempered woman with pretty brown eyes.

Once a recluse preferring to live alone.

Working with troubled adolescents, Frederique Marchand doesn’t suffer fools and won’t put up with bullies. Especially handsome strangers like Newt who think they can run roughshod over her. She loves her work, but on her own time she much prefers the company of her menagerie of animals.

But with the welfare of a teenager at stake, she must put aside rocky first impressions and work with a man who needs her as much as she’ll come to need him. 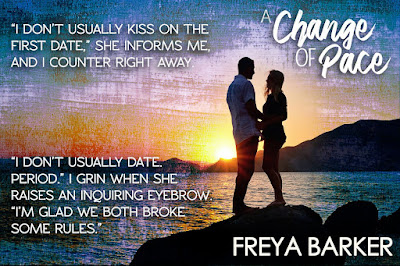 Read my five-plus-starred review of A Change of Pace.

Add A Change of Pace on Goodreads. 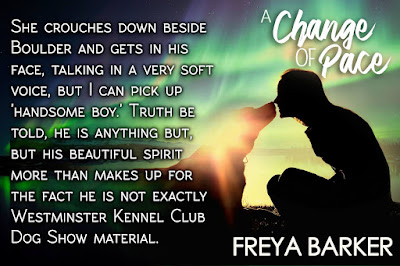 An Excerpt from A Change of Pace
"You?"

The question slips from my lips before I can check it. It would appear that Freddy Marchand is a woman. Not just any woman, but the feisty vigilante with the gorgeous hair, who verbally crushed my balls in the Parry Sound Mall parking lot. The woman who about ran me over with her shopping cart at Canadian Tire the week after, and the same woman I could barely keep my eyes off of last night at the sports bar where Millie and I stopped for a bite. That woman is the therapist? And what kind of name is Freddy anyway?

"I could say the same thing," she fires back, composing herself after what clearly was shock at seeing me.

"Guess you could," I agree, stepping into her office. "Maybe we should rewind and start with a proper introduction this time." I hold out my hand. "My name is Newt Tobias, and I'm fairly new to the area." Almost reluctantly, she grabs my hand and I can't help noticing how nice her cool, slim fingers feel, sliding along my palm.

"Frederique Marchand, but everyone calls me Freddy, or Fred."

The sound of her voice is deeper than I remember, but melodic and feminine. I'll be damned if I call this woman Fred, not going to happen. 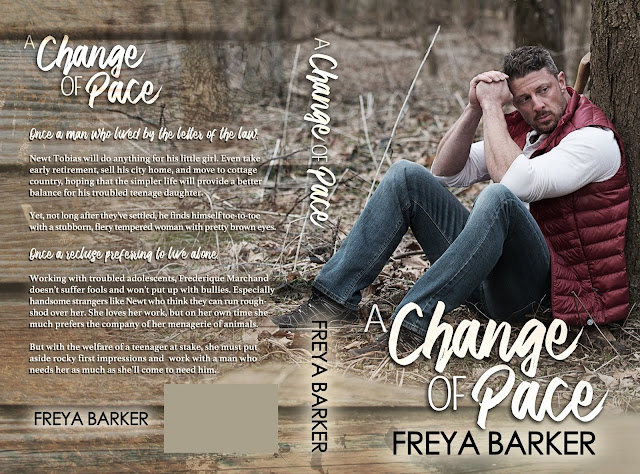 Freya Barker inspires with her stories about 'real’ people, perhaps less than perfect, each struggling to find their own slice of happy. She is the author of the Cedar Tree series and the Portland, ME novels.

Freya was the recipient of the RomCon “Reader’s Choice” Award for best first book, Slim to None, and was a finalist for the 2016 Kindle Book Awards for From Dust. She currently has two completed series and three anthologies published, and is working on two new series: La Plata County FBI—ROCK POINT and Northern Lights. She continues to spin story after story with an endless supply of bruised and dented characters, vying for attention!