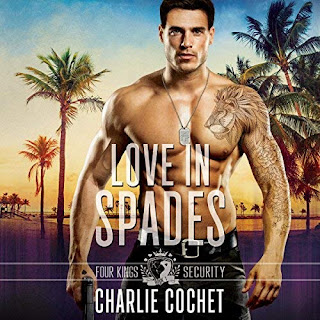 Note: This audiobook was provided by the author via Vibrant Promotions.

I've been on something of a Charlie Cochet listening binge this month of July, having happily devoured her THIRDS series in a matter of a couple of weeks, and I immediately jumped at the chance to listen to and review the first audiobook in her Four Kings Security series. I loved Love in Spades when I read it in April and I wanted to see how the story would translate on audio, and if my expectations with as far as the chosen narrator were concerned were going to be met. After all, there's a reason why Greg Boudreaux is a favorite of mine, and combined with Charlie Cochet's writing, I had extremely high hopes for something amazing, and amazing was exactly what I got with this.

Former Special Forces Anston Sharpe works hard AND plays hard. He may be thirty-nine but he isn't a fuddy-duddy, knowing how to have fun--a wee bit too much, if you ask the rest of the Kings that make up the Four Kings Security and those who know Ace best. When he takes point with the protection of thirty-one-year-old Colton Connelly, however, he's challenged in a way he's never been before. Colton doesn't appreciate being forced into having a security detail he doesn't believe he needs. As far as he's concerned, this was overkill on his protective father's part, but the more time Ace spends with him, the more obvious it becomes that there were now two very real threats: the one to Colton's life and the one to Ace's heart. Falling for their client's son could cost Ace...everything.

Love in Spades is already the second time around as far as the story is concerned, and I still loved it, only now, I loved it even more. Charlie Cochet had a story that balanced out the romance and sex and the suspense and action. She had a great cast of characters in the four owners of Four Kings Security--Ward "King" Kingston, Anston "Ace" Sharpe, Russell "Red" McKinley, and Eduardo "Lucky" Morales--along with their fellow Special Forces teammates and brothers-in-arms, Jack and Joker that are going to be featured as the series moves forward. Ace and Colton had the whole back and forth that belied this intense connection they shared. The mystery aspect was exactly what I wanted--the kind that kept me on my toes from the moment it began until the revelation was made. Greg Boudreaux was perfection, making this team-up with Charlie Cochet an oh-so-promising one. Five-plus stars. ♥