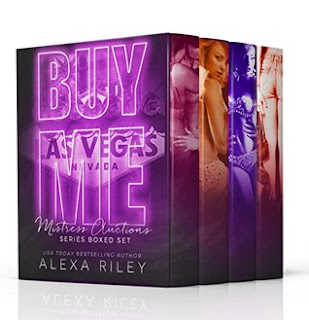 Buy Me - The Complete Series is the complete collection of stories in the Mistress Auctions series from bestselling author Alexa Riley and includes the three original Buy Me stories of Justin and Aaron Cortez and Stella Johnson (book one), Charles Townsend and Mandy Burch (book two), Antonio "Don" Cortez and Georgia "Peaches" Livingston (book three), plus The Final Mistress Auction short story with Leo Ramsey and Samantha Levine and His First and Only, the short story about Tiffany Smiths and Ethan (who I couldn't find a last name for), which was originally part of the For the First Time multi-authored anthology. Each of the stories are short, with the last two being shorter than the rest, but all five were highly satisfying reads, which has been the case with the Alexa Riley-penned books I've read.
The author is known for insta-love and guaranteed happily-ever-afters, we get the latter in all five stories, but only one in the case if the former. Now, my definition of "insta-love" has the main characters falling for one another within a day of meeting, but for four of the stories, there was already some history--even if some merely involved observing or watching the other from afar--and one story was a second chance romance. The sex, as always, was plentiful and hot, and all the couples--okay, Justin, Aaron, and Stella were a trio--were highly likable. Admittedly, I do have a favorite and it was Leo and Samantha's story because they got their HEA after all the quiet exchanges they had in the other books. Buy Me - The Complete Series is a steal at 99 cents, so if you like 'em quick and dirty, hop to it! Four stars. ♥

Purchase Buy Me - The Complete Series on Amazon.