Book Spotlight: The Sins That Bind Us by Geneva Lee 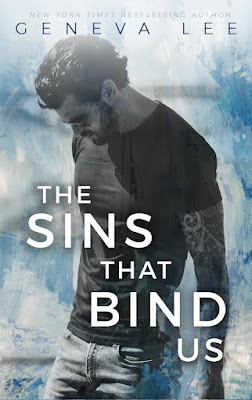 About The Sins That Bind Us
I wasn’t given a choice. Not when I did my first line of cocaine. Not when I became a single mother. But I changed, and every decision I’ve made was to protect myself and my son from my weaknesses—and my past.

Until Jude came along and made me question everything, even my own secrets.

The sins I carry with me can never be discovered. Life handed me broken bits of people and left me to construct my own world, and it’s too fragile to take a chance on Jude Mercer.

We write our own stories.
We build our own prisons.
We weave our own lies.
We commit the sins that bind us.

Read my four-starred review of The Sins That Bind Us.

Add The Sins That Bind Us on Goodreads.

The Sins That Bind Us Trailer

An Excerpt from The Sins That Bind Us
Maybe he was already as tightly wound as me, but I can’t help but squirm under his possessive stare. I ignite that ferocity. I’m the storm that unsettles the peaceful blue pools of his irises. And realizing that vanquishes my fear. Because I’ve undone this man.

I want to say something but my mouth is empty. Before I can find words his lips find mine instead. He crashes against me, and I’m powerless against his force. He’s washing me out into the unknown and I don’t care if I drown.

My body shapes to his as his hand slides under my ass, lifting me from my feet. I coil around him, instinctively pressing the core of my want against his groin. A low growl vibrates through him and his arms bind me closer.

I want as much of him as he’ll give me. It’s the only need I’m capable of processing and I open to him, allowing his tongue to stroke across my teeth and then massage over mine. It’s an invitation and I RSVP by tangling my fingers into his hair. I grip it tightly, desperate to possess him as fully as he has me.

When he backs into the kitchen table, we both spring into action, unbuttoning and unbuckling as quickly as our impatient fingers allow. Wiggling off my jeans, I return my attention to his body. I trail my palm over the swirling black ink and then I lunge forward and sink my teeth into his skin.

“Christ, Sunshine,” he grunts, but before I can register it as a complaint, he’s pushed me flat against the table and unsnapped my bra. I move to slide it off and my wrist knocks over a box of crayons.

Our eyes lock as they scatter to the floor and before I can raise the white flag, I’m back in his arms. Jude kicks open the door leading to the garage.

“I’ll fix it later,” he promises, sweeping me out the door. Twirling me around, he barricades it with our bodies. “Hold on.”

“I wrap my arms around his shoulders and cling to him as he frees his dick. I feel its heat prod against my belly. His whiskers scratch against my cheek as his mouth slants toward my neck. “I can’t be patient,” he warns me.

He doesn’t need coaxing. His hand slips between my thighs and shoves my panties to the side. My bare back smacks against the wood as he thrusts into me. Jude’s chest smashes against my breasts as his weight overwhelms me. I lose myself to the rhythm. To the crash and the ebb. There is only each stroke, and the glorious, violent inevitability of being abandoned and filled.” 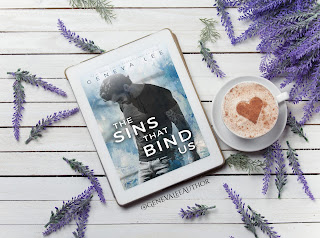 Geneva Lee prefers fantasy to reality, especially fantasies involving powerful, dangerous, and sexy men. You can find her devouring a good romance while avoiding the laundry and the children. She lives in Kansas City with her family.