Review: The Summer We Surrendered by Victoria Denault (Ocean Pines #4) 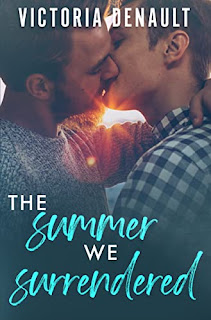 Note: An advance reader copy (ARC) was provided by the author.
The Summer We Surrendered was my most anticipated book in Victoria Denault's Ocean Pines series, and it definitely delivered when it came to the angst and tension. When Declan Hawkins returned home to Ocean Pines, it was as a man free of all his secrets. Well, almost all his secrets. There were a couple he continued to keep--that is, until Abbott Barlowe decided to make his own return to their hometown on a more permanent basis. The trade to the newly formed professional hockey team was one that Abbott never thought was possible but always envisioned. He would be closer to his sister and niece, nearer to all the places he enjoyed going to whenever he was in Ocean Pines, especially Hawkins Lobster Shack...and maybe this was his chance to finally make a stand, come out, and simply be with the only guy he's ever loved--his former best friend, Deck. Unfortunately, Deck makes it clear that he isn't interested. He knows all too well what a broken heart courtesy of Abbott feels like, and if he's honest with himself, Deck's heart has never fully recovered. How long will Deck be able to resist, and if he does give in, will Abbott make him wish they had never surrendered?
This final visit to Ocean Pines finds our main characters majorly pining for each other. (Pun totally intended!) But even though Declan and Abbott never truly stopped loving one another, they had one major issue that they have yet to successfully hurdle, and that's Abbott keeping his sexuality a secret from almost everyone, save for Deck (obviously), Aspen (Abbott's sister), and his estranged parents. Nothing came easily for either of them, but I loved how Deck's family fully embraced him when he finally told them he was gay in the previous book, The Spring We Ignited, and how they were supportive of him here. I understood where Abbott was coming from when they originally ended things, and yes, as much as he wanted to come out now, there were still issues brewing. There were moments where I was frustrated with the lack of open and honest communication, but again, I got it, especially the feeling of being stuck between a rock and a hard place. This led to a lot of back and forth for Deck and Abbott, but ultimately, these two got the happily-ever-after they deserved. I'm going to miss the Hawkins clan and all things Ocean Pines, but I'm glad it ended on a high note with the second-chance M/M romance that is The Summer We Surrendered, which easily receives four stars.
-------------------------
Read my reviews for the Ocean Pines series: