Review: The Wicked Truth by Melissa Foster (The Wickeds: Dark Knights at Bayside #4) 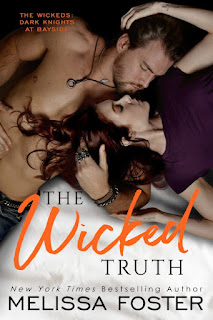 Note: An advance reader copy (ARC) was provided by the author.
We're back at Bayside with the fourth novel in Melissa Foster's The Wickeds: Dark Knights at Bayside series, and this time around, we've got the one and only biker princess, Madigan Wicked. She's twenty-five and is surrounded by overly protective men within her family, whether it be by blood or the club's brotherhood. They need not worry since Mads is wary about handing her heart over to any man, no thanks to a painful lesson learned when she was younger. She's focused on her businesses and spending time with her loved ones, not on falling in love. So, when she hooks up with Tobias Riggs, they both agree that it would lead to nothing more than scratching an itch. Pretty soon, however, they're underneath each other's skin, with Tobias doing his best to keep Mads at arm's length, but Mads's is drawn to the twenty-eight-year-old mechanic more than she's prepared to admit--both to herself and anyone else. The connection they share is unlike any other they've every experienced before, but will it break under the strain of Tobias's dark truths?
Wicked! Melissa Foster is wicked, I tell you! Wicked(ly) good at creating these families and communities that share ties and make you wish you belonged with them. Madigan is the first Wicked female to get her story told, and while she's got a slew of protective guys surrounding her, I loved her fierce independence and the confidence that she had in herself and whatever she set her mind to. Tobias was definitely the epitome of mysterious, but it was easy to understand why he didn't want to build any intimate relationship with other people after everything he had gone through over the past few years. Of course, Mads wasn't your ordinary type of woman, and luckily for Tobias, she had a huge and understanding heart as well. The conflicts in the story came from within, i.e. Tobias's not being as forthcoming and overly protective brothers and cousins, with one in particular taking the crown as the most stubborn of them all, and I think it added an intriguing touch. I enjoyed the heck out of this book, so here's my wicked truth: The Wicked Truth is a five-starred read! (Bonus points for the inclusion of a female character originally from the Philippines named Bayani--love it!)
-------------------------
Read my reviews for the Wickeds: Dark Knights at Bayside series: