Review: The Path to You by Carrie Ann Ryan (The Wilder Brothers #3) 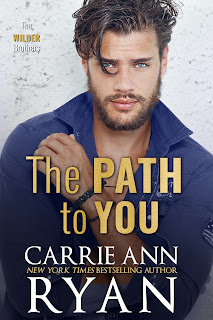 Note: An advance reader copy (ARC) was provided by the author via Give Me Books Promotions.
We're back in Texas with the third novel in Carrie Ann Ryan's Wilder Brothers series, and it's another second-chance romance except this time, it's got a celebrity twist to it. The Path to You is Everett Wilder's story, Everett being the third among the Wilder siblings and twin to East and the chief financial officer of Wilder Retreat and Winery. The incident that led to his leaving the Air Force may have affected his memory, but Everett knows all too well that he's out of Bethany Cole's league. She's an award-winning actress who lives in California; he's a veteran turned CFO working and living with his family in Texas. But when she arrives at their retreat needing a place to get away from the negative press after her break-up with her cheater of an ex, Everett's path seems to cross with hers at every single opportunity. He may not have remembered the first time they met and everything that happened , and the odds may seem to be stacked against them, especially with someone targeting Bethany, but this time, Everett refuses to consider letting her go.
With the peek into Everett and Bethany's story in the previous Wilder Brothers novel, Always the One for Me, I was eager to find out what their history was and what was awaiting them in their own book. Theirs was a second-chance romance, and with Bethany being an actress, there was that added element of a celebrity romance as well. Everett having to deal with his memory loss due to an attack on his convoy while deployed was an interesting twist, but I'm glad that it wasn't this prolonged conflict that affected the relationship he was trying to build with Bethany. As for the suspense part, Carrie Ann Ryan added a creative touch to the whole obsession story line, and the motivation was also a bit surprising. Overall, I enjoyed Everett and Bethany's book, which is why The Path to You gets 4.5 stars, and I've already added Elijah's book on my TBR list.
--------------------------
Read my reviews for the Wilder Brothers series: