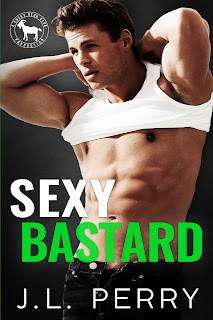 Note: An advance reader copy (ARC) was provided by the publisher via Give Me Books Promotions.

"You have my heart in your hands... please take good care of it."

Sexy Bastard is the long-awaited follow-up to J.L. Perry's Bossy Bastard, both of which are part of the Cocky Hero Club book universe which consists of stories inspired by bestselling authors Vi Keeland and Penelope Ward's Cocky Bastard series. When I say "long-awaited", I'm talking two and a half years, so the wait has reminded me yet again that patience is, indeed, a virtue (that I barely have, but hey, good things come to those who wait). While you could try reading this new novel as a standalone, I'm going to go ahead and highly recommend you check out its predecessor for two simple reasons: first, Bossy Bastard was a great read, and second, you'll see a portion of the main characters' relationship there, then you'll have an inkling why Sexy Bastard is as anticipated as it is.
Grayson Edwards was a confirmed bachelor who was in no rush to commit to any woman. But that was before he met a gorgeous woman named Carla. She was everything he didn't know he needed, and one night turned out to be just the beginning for them. They fell fast, and they fell hard. He knew without a shadow of a doubt that they were meant to be, so getting engaged wasn't a surprise. What she did soon after, however, shocked not just Grayson but everyone around them. Carla abruptly ends things and leaves the life she had behind. It isn't until their best friends' wedding two and a half years later that their paths cross again. He wants more than answers--he wants her back. She has reasons for why she left, and she fears the truth will devastate the man she loves.
This book was such an emotional roller coaster! When Carla called off her engagement to Grayson in Bossy Bastard, and based on their emotions during Emma and Ashton's wedding, it was clear that the story they had to tell wasn't going to be an easy one. I don't want to give a whole lot away. This is the sort of book that works well whether you go in blind or have read the blurb and have the most basic of ideas what awaits you. Either way, the best thing I can say is that my heart is still recovering, and it's been hours since I finished reading this. Carla was a woman who had more strength than she gave herself credit for, and Grayson was a man who loved beyond measure. These two and their story will stay with me, and that says a heck of a lot. Sexy Bastard has earned its five-plus stars.
Release Date: 18 December 2022
Date Read: 17 December 2022
Learn more about J.L. Perry.
Purchase Sexy Bastard on Amazon.