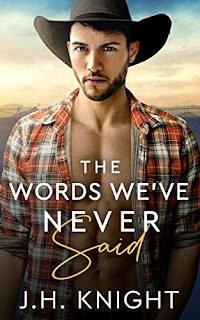 Note: An advance reader copy (ARC) was provided by the author via Gay Romance Reviews.

"I know," Billy said softly. He worried his lip between his teeth before he added, "I believe you. I believed you the first time you said it. Believed it before you said it. And I love you too. But it's not about the words we've said to each other." Because words would never be enough.

J.H. Knight isn't a new author to me, having read The Last Thing He Needs about eight or so years ago and When the Devil Wants In nearly five years ago, which was co-written with Cate Ashwood. Obviously, it's been a while since I last read something penned by Knight, so when I learned that she had a brand-new standalone in the works, I knew I had to get all grabby hands once it was out in the wild. The Words We've Never Said is that standalone and it's now become one of my absolute favorite MM romance reads this year.
The Words We've Never Said is a contemporary MM romance set in Texas. Sam Northwick hadn't heard from his older sister in years, so when he's informed that she'd been arrested for murder and that her two children were to be placed in his care, Sam is shocked. He had no idea he even had a fourteen-year-old niece and seven-year-old nephew. Sam already had a lot on his plate prior to Bree and Winston's arrival, so acting on his attraction to Billy Jones would be more than an inconvenience. But this was more than lust and beyond the crush Billy's had on Sam for a decade and a half. The problem is, will Sam ever be ready to come out publicly and how long will Billy be willing to wait?
This book snapped up pieces of my heart and made it whole again by the time I got to the end. I was so darn invested in Sam and Billy's romance as much as I was in the home and family that Sam was trying to create with Bree and Winston. This was a fairly angsty read--one that saw me shedding a few tears a couple of times--but it was wonderfully tempered with touching lighthearted moments and punches of levity. I love the growth in the characters and the development of the story, and J.H. Knight's writing is sublime. Which is why it needs to be said: The Words We've Never Said is a five-plus-starred read.
Date Read: 03 December 2022
Learn more about J.H. Knight.
Purchase The Words We've Never Said on Amazon.