Review: Made for Me by Natasha Madison (Made For #1) 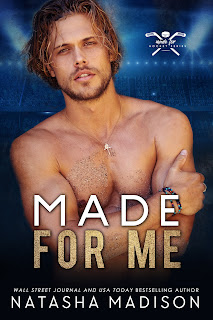 Note: An advance reader copy (ARC) was provided by the author via Wildfire Marketing Solutions.
Nothing makes me giddier than when a favorite go-to author releases the first book in a new series, and this go-around, it's none other than Natasha Madison with her latest hockey romance spin-off, Made For, and its series starter, Made for Me. The first main characters are Julia Williams and Chase Grant, the former being the twin sister of Jillian Williams and sister-in-law of Michael Horton (Only One Mistake, book six in the Only One series), and the latter being the son of Karrie Cooley and Matthew Grant (Something So Perfect, book two in the Something So series). While you don't necessarily need to read the original series and the spin-offs that followed, my humble suggestion is that you add them to your to-be-read list and check all of them out in the future if you haven't already.
Made for Me is a friends-to-lovers hockey romance featuring Chase Grant and Julia Williams. While Chase's family is considered hockey royalty, Chase chose to hang up his skates and become a doctor. After his stint with Doctors Without Borders, he makes the decision to return to the hockey fold, becoming a part of the Dallas Oilers as the team's main physician. He's happy to have family and friends around, and life as he knows it is better than ever. When a tragic accident has social worker Julia crossing paths with Chase in a local hospital's emergency room, he's immediately protective, wanting nothing more than to be there for her in any and every way she needs. They've been friends for years, and Julia's been embraced by Chase's family, but now they're beginning to see each other in a whole new light. Could they possibly have been always made for one another?
I enjoyed the heck out of this series starter! While Chase wasn't an actual player for Dallas, he did love the sport of hockey, and it actually added different layer of interest. There seemed to be a playfulness in Chase and Julia's friendship that traipsed into flirty territory before they realized that they were meant for more. My heart went out to Julia as she was dealing with everything that was being thrown at her, but Chase was such a great pillar of support. Of course, we get a lot of comic relief from the, erm, elders of this quirky book world. Made for Me was definitely a great start to this newest chapter in this reliably entertaining hockey romance universe Natasha Madison has created. Five stars!
Date Read: 20 December 2022
Learn more about Natasha Madison.
Purchase Made for Me on Amazon | Apple Books | B&N | Kobo.