Review: Turn Me On by Lauren Blakely (Winner Takes All #2) 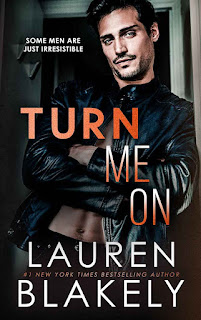 Note: An advance reader copy (ARC) was provided by the author.
Turn Me On is the second novel in the Winner Takes All series, the first being The Boyfriend Comeback. When the series starter was published, the series was actually entitled The Boyfriend Zone, but it's been renamed since then. This, like many of Lauren Blakely's books may be read as a standalone, but if you're a longtime reader of hers, you know that her books also tend to share ties with previous (and future) releases, so be on the lookout for Easter eggs. Let me reiterate, though, you don't need to read anything prior to this book in order to enjoy it fully--and that includes the free prequel novella, The Sexy Suit, which was originally part of Kindle Vella, Amazon's platform for serialized stories and where I read the story originally. The aforementioned prequel is part of the full-length novel, so if you never had the chance to pick it up previously, no worries at all!
This is Zane Archer and Maddox LeGrande's story, the former being the twenty-five-year-old first baseman for the San Francisco Dragons, and the latter being thirty-two-year-old, a lawyer and sports agent, and the newest member of CTM, the agency that manages Zane's baseball career and sponsorships. It's Maddox's expertise at matching his clients with companies that align with who they are. So, Maddox knows flirting with his newest client is a no-no, but there's just something about Zane that he finds irresistible. However, Maddox has worked hard for the career that he has, and becoming involved with Zane could damage it beyond repair while also leading to costing Zane potential deals that he needs for his brother and niece. Maddox can usually find a loophole, but the only hole that he and Zane could be left with is the heart-shaped one from a love that can never be.
I swear, Lauren Blakely should have slapped a warning label on this cautioning readers about how darn hot it was going to be. Maddox and Zane were lust and love and everything in between all wrapped up in a story that had so much sexual tension, romantic feels, and even a great balance of humor and angst. These two had their flirt game on, even when they were desperately trying to keep things platonic and professional. They were both passionate about what they did--Maddox being an agent and Zane playing baseball--but they also needed to get out of their own way in order to realize that passion need not be reserved for one thing only. To be fair, one of the guys had to get his head on straight more than the other. Not saying who, though, so just go dive into Turn Me On already, and get turned on by all things Maddox and Zane. 4.5 stars.
Release Date: 02 December 2022
Date Read: 30 November 2022
Learn more about Lauren Blakely.
Purchase Turn Me On on Amazon.