Review: You Had Your Chance, Lee Burrows by Piper Rayne (Kingsmen Football Stars #1) 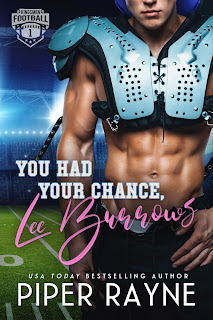 Note: An advance reader copy (ARC) was provided by the authors via Valentine PR.
We've got ourselves a new series from the writing duo of Piper Rayne, and this time around, it's all about football--and romance, too, of course! The Kingsmen Football Stars series actually kicks off with the free prequel novella, False Start. I highly recommend it be read before diving into the first full-length novel, You Had Your Chance, Lee Burrows, since the freebie lays out the events eight years prior, i.e. the beginning of their relationship and its painful demise. Both books feature the eponymous male main character, Lee Burrows, who first popped up in a cameo appearance in his older brother's book. The book is Offside with #55, the sixth and final book in the Hockey Hotties series, and the older brother is none other than Kane Burrows, former player turned coach of the Florida Fury. But no, you don't necessarily need to read prior to this.
You Had Your Chance, Lee Burrows is a second-chance football romance with twenty-nine-year-old Lee Burrows heading into the season during a contract year. He may be a superstar quarterback and team captain with the San Francisco Kingsmen, but he's also aware that there are no guarantees whenever a player's contract is up. He needs to keep his head in the game, and distractions are a definite no-no. But then the newest member of the Kingsmen's medical team is introduced, and she just happens to be someone Lee is more than familiar with--Shayna Kudrow. She's the one that got away back in college, and losing her was his biggest regret. Maybe this is his second chance with Shayna. But playing for the Kingsmen is Lee's dream come true; and being a sports therapist for the Kingsmen is something Shayna's worked hard for. Becoming involved could be an issue...
I quite enjoyed this first foray into the Kingsmen Football Stars series. Not only do the authors provide readers with a fun-filled and entertaining romance involving Lee and Shayna, but they also offer up an introduction to two of the already known male main characters in the next two books and potential future heroes (fingers crossed that Miles is one of those!) as well should the series go beyond three novels. I liked the fact that there wasn't any rush towards reconciliation between Lee and Shayna. I'm one of those people that appreciate it when there's some actual work to be done in order to become a part of an ex's life again. You've got to re-earn that spot, people, and Lee did exactly that. Along with the romance was the football, and I'm happy to note there was enough of the latter to satisfy even a stickler like me. You Had Your Chance, Lee Burrows easily gets 4.5 stars.
-------------------------
Read my reviews for the Kingsmen Football Stars series: