Review: Down in Flames by Kate Meader (Hot in Chicago Rookies #2) 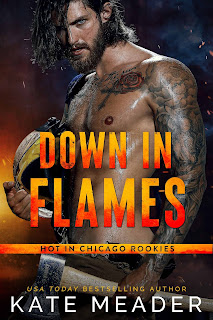 "Oh, I can give more, but let's keep it to the best you can offer. Only here's the thing: I can't stop you from falling for me." He shrugs, throwing up his hands. "If it happens, it happens. Then you're majorly screwed."

Down in Flames is the second novel in Kate Meader's Hot in Chicago Rookies series, and it crosses over with her Rookie Rebels series. There's also a free prequel novella, White-Hot Hookup, that serves an introduction to the main characters, twenty-two-year-old professional hockey player Hudson Grey, who is hoping to be rid of his virginity but whose sexuality remains a secret, and twenty-three-year-old bartender Jude Torres, who is out and not looking for any sort of relationship. That being said, this new book can be read as a standalone, and the prequel is included in the full-length novel. If you've read the novella, you can skip to Down in Flames, where the story picks up a year after the aforementioned hook-up and finds the two a year older, with Hudson embracing his sexuality and very much out, having been traded to the Chicago Rebels, while Jude is a candidate firefighter with the Chicago Fire Department's Engine 6. Hudson may have ghosted Jude a year ago, but now, he's reaching out to ask for some...guidance...while finding his footing in Chicago's gay scene. For a guy who's never been interested in commitment, Jude is tempted for more, hoping to go from being Hudson's first to becoming his forever. But will his past wreak havoc on his future with Hudson?
For years, Undone by You (Chicago Rebels #3) has remained my favorite Kate Meader novel--and one of my all-time top M/M romances--but it looks like Down in Flames is giving it a run for its money. Hudson and Jude were EVERYTHING. I couldn't look away from these two--and by "look away" I mean "stop reading"--even if I were literally on fire. Meader brought the heat with equal amounts of heart, and seeing both Hudson and Jude grow as main characters was a wonderful thing. Sure, Jude could teach Hudson a thing or two about being comfortable in his own skin and venturing out and into the gay landscape that Chicago had to offer, but he also learned quite a few things about himself because Hudson accepted him for who he was, warts and all. They were making discoveries about themselves as individuals and figuring out how to navigate their relationship as a couple. They certainly had obstacles that needed to be hurdled, but I adored that they had as strong a support system as they did. Meader also did a remarkable job merging her two fictional worlds--firefighting in Hot in Chicago Rebels and pro hockey in Rookie Rebels--and having me eagerly awaiting what ever comes next in both. I relished every single second I spent reading Down in Flames; it gets five-plus stars!
Release Date: 06 December 2022
Date Read: 05 December 2022
Learn more about Kate Meader.
Pre-order Down in Flames on Amazon | Apple Books | B&N | Kobo.