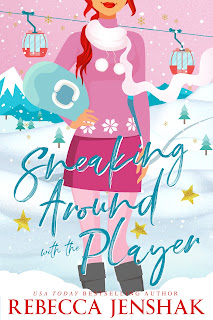 Note: An advance reader copy (ARC) was provided by the author via Valentine PR.
Sneaking Around with the Player is the second book in the Holiday with the Players duet penned by Rebecca Jenshak. If you've read the first book, Snowed In with the Player, then I'm sure you've been really curious about Stella Walters and Beau Ricci, who were already seeing each other but whose relationship wasn't exactly welcomed with open arms by Stella's older brother and his teammates. You see, as much as Stella and Beau were smitten with one another, she's from Arizona, and he studies in Colorado. Oh, and he happens to be a star college football player...making him Stella's brother, Felix's, rival.
This may sound strange, but I was kinda-sorta-maybe prepared to not like Beau as much as I did Teddy from the first book. However, I decided to set aside whatever first impressions I had of him, and thank goodness I did because I quite liked getting to know the guy. I appreciated that his and Stella's story was very different from that of Stella's twin sister, Holly, and her now-boyfriend, Teddy. This new book has a bit more angst to it, but I'm not talking about drama for the sake drama. The conflict has more to do with the whole rivalry between Beau and Felix than anything between Stella and Beau, and I was glad it wasn't drawn out. Sneaking Around with the Player is a 4.5-starred holiday novella.
Release Date: 06 December 2022
Date Read: 05 December 2022
Learn more about Rebecca Jenshak.
Pre-order Sneaking Around with the Player on Amazon | Apple Books | B&N | Kobo.