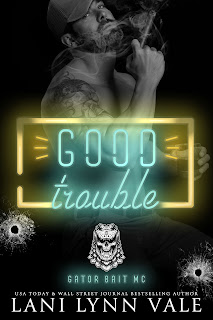 Note: An advance reader copy (ARC) was provided by the author via Uplifting Author Services.
Lani Lynn Vale brings the best kind of trouble in the second book in her Gator Bait MC series. Good Trouble is the story of Diana Grassi and Bain McDempsey, although Bain's special nickname for her is "Luce", as in Lucy, the television character made famous by Lucille Ball. When her boyfriend, aka Bain's younger brother, Braxton, bailed on taking Luce to their senior prom, it was big brother Bain, who was set to be deployed in the Navy the following day, that stepped in. It would turn out to be an unforgettable night for both Luce and Bain. With thousands of miles between them, the two would forge a friendship, even as Luce would go on to marry Braxton. When she's assaulted by a stalker, though, it isn't her husband who saves her--it's her husband's brother, who would go on to convicted of manslaughter, serving six of eight years before being paroled. Now twenty-seven and divorced, Luce relishes having her twenty-nine-year-old former brother-in-law around. But are either of them prepared to take a chance on seeing where their feelings will take them, or will a nefarious effort to bring them harm end any opportunity for them to see they've always belonged together.
I don't want to jinx this, but I have a sneaking suspicion that Gator Bait MC could turn out to be my favorite series from Lani Lynn Vale. Yeah, yeah, we're only two books in, but I'm rather smitten by this odd-ball band of brothers, and the female characters that they're paired with (and that includes the potential ones) are nothing to sneeze at either. Bain was protective of Luce, but she could definitely hold her own as well and she was equally as protective of him. She was shy around crowds and strangers, but you could see the more outgoing side of her when she was with those who mattered most, and when she needed to speak up for herself, she did so without hesitation. Can I also say that I was thrilled that there wasn't a whole lot of unnecessary drama when Luce and Bain got together? Sure, Braxton was a jerk about it, but those who cared about Luce and Bain were supportive and there were no rumblings of how wrong it was that they were former in-laws. There were continuity and repetition issues, but other than those, I was entertained from start to finish, and I'm also eager to get the next book in my hands. Good Trouble is the best kind of trouble. 4.5 stars!
-------------------------
Read my reviews for the Gator Bait MC series: