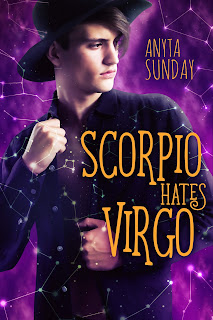 From friends-to-lovers, Anyta Sunday tackles the opposite side of that romance trope with her enemies-to-lovers romance and the second novel in her Signs of Love series, Scorpio Hates Virgo. I think, though, it would be more apt to call this story revolving around Perseus and Callaghan an nemeses-to-frenemies-to-lovers romance. After all, the journey that Percy Freedman and Cal Glover take may have started with them as adversaries of a sort, but we see how they hesitantly become friends, and then much more. This is slow burn with quirk and it's that patented combination that makes me easily identify this is penned by Anyta Sunday, who is fast becoming a go-to author for me (and all it took was a couple of books!). Percy, Cal, and the cul-de-sac-ers that make up the neighborhood where Percy's recently deceased but much beloved Aunt Abby easily made this one of my favorite reads for 2017.

When Percy needed a place to call home, it was his Aunt Abby that gave him both refuge and family. When she passed away, it broke Percy far worse than the betrayal of his ex-boyfriend. Leaving him the house on the cul-de-sac is what's led Percy back, but not to stay. His intention is to sell the place, a move that doesn't sit well with quite a few people. Surprisingly, the one who appears to be most opposed to his plan is none other than his neighbor nemesis, Cal. They still trade barbs and push each other's buttons, but there's a slow and steady shift in their non-friendship, one that has Percy wondering exactly what the heck is going on. When a neighborhood game of Sherlock Gnomes starts, Percy not only receives anonymous gifts but also enjoys online conversations as Gnomad with Gnomber9. Will all this neighborly love--particularly, one neighbor--make him change his mind about selling?

Ah, all that back and forth between Percy and Cal was the kind of foreplay that brings a smile to my lips. I loved the pacing and progression of their relationship. I felt as if I was an unofficial cul-de-sac-er (yes, yes, I know that isn't an actual word) who was their to observe and take notes as these two got to know each other beyond all the snark and barb. The more we see them together, the easier it is to spot the awareness they had of one another. This also had a bit more angst than the first novel, and you certainly won't hear me complaining! It was a tale about finding family, home, and love and the realization that not everyone leaves. It was fun to have Theo Wallace and Jamie Cooper, as well as Theo's twin, Leone, for a couple of cameo appearances, with the former giving Percy something to think about. I loved Scorpio Hates Virgo, and I'm excited for even more from the Signs of Love series. Five stars! ♥