Review: A Saving Grace by Annie Stone (Free at Last #3) 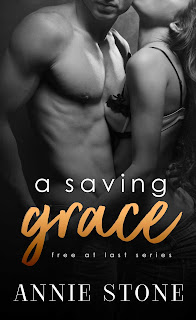 Prepare yourselves; I'm about to go all cheesy with this play of words I have going on in my head and want to share with you. The Free at Last series didn't get off to the best of starts, but I wanted to give it A Fighting Chance. By the time I finished the second book, I knew it was A Losing Battle and that I would be waiting anxiously for the conclusion. With the end of the series, it truly is the third and final novel that proved to be A Saving Grace. Okay, maybe that was corny, but I meant it. The beginning was okay, but it was the middle part of the series that got me invested, and by the end of it all, reading all three books paid off. You will need to read these books in order because the first two do end in cliffhangers, and I'm giving you a heads-up that there is cheating that occurs and if you consider that a no-go, you may want to skip the series. However, if you're tolerant of the subject matter, then I think this may be one trilogy that could prove to be worth you delving into as sensitive a topic as this one. My affection for this series was very much a slow burn, but at the end of the day, I must admit that it was well-earned.

Last we saw Mackenzie Hall, she had a choice to make but faltered when it came time to actually let it be known. By the time she was finally ready to stand up for the man she loved, it was too late. It takes three or so years and one phone call for Mac to see Hunter Tilman once again. He's suffered a life-altering injury, having lost a limb, but it's the feeling of betrayal on Mac's part that continues to be Hunter's greatest source of pain. He pushes her away before she's even able to let him know what she was desperately trying to tell him ever since he cut off communication with her. Mac is at a loss as to what to do next with Hunter, especially as he makes it glaringly clear that he doesn't want to see her. When she unleashes upon him a revelation that makes him question what it is he thinks he knows and what it is he's been missing, Mac and Hunter realize that there is one person whose welfare must be taken into consideration first before anyone else's. Mac loves Hunter and Hunter loves Mac, but can they overcome those years of heartache and move forward in order to be the family that they were truly meant to be?

It was a long, hard road for Hunter and Mac, but thank God these two finally came to their senses and learned how to actually communicate. It's easy to lay blame at Mac's feet, but both she and Hunter made certain decisions that were based on their emotions rather than on actual sensible thinking. But then, isn't that how real life is as well? We're often led by our feelings more than our thoughts. Fortunately for these two, they're able to rectify things, but HOW they do it is something you'll have to find out on your own because I don't want to give more details than I already have in my previous paragraph. Can I just say that Carey, Hunter's younger brother and the Mac's greatest source of support, stole my heart throughout this series, and I'm seriously hoping that we get his story sooner rather than later because the guy needs his own happily-ever-after! My one "complaint" would have to be the almost superhuman manner in which Hunter acclimated to having a prosthetic. It felt unrealistic, but maybe that's just me. Overall, A Saving Grace left me rather satisfied. It gets 4.5 stars, giving the series an average of four stars. ♥

Read my reviews for the Free at Last series:

Purchase A Saving Grace on Amazon.