Review: A Losing Battle by Annie Stone (Free at Last #2) 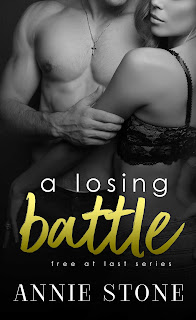 I confess that I was torn about whether I wanted to read the second novel in Annie Stone's Free at Last series or not. The series starter, A Fighting Chance, left me feeling iffy, mainly because it didn't delve under the surface at all. What we got there was the uncomfortable family dynamic going on among a father, his two teenage sons, and his girlfriend. There was more than one kind of tension going on, particularly between Mackenzie Hall and Hunter Tilman, Mac's boyfriend's older son and eight years Mac's junior. But everything was hinted at, piquing my curiosity, but also leaving me rather frustrated because all that happened was I had formulated all these questions on my head but didn't get any answers. But, well, I guess when you really think about it, that's what the author must have wanted--to hook her readers in and make them curious enough to come back for the next book. If so, then she succeeded, because here I am, back for more. And that's the thing--I sincerely went into it hoping that I got the "more" that was missing from that first book. So, did I find what I was looking for? Why yes, I did, indeed.

If cheating is a trigger for you, then I'm going to put this out there: there IS cheating. Mac is in a relationship with Carter, Hunter's father, but she has feelings for Hunter, who has made it clear that he's in love with her. So, does Mac choose the young man who's eight years younger than her but makes her feel as if she's the queen of his heart, or does she choose the older man who's eighteen years her senior and gives her a sense of security that's been lacking in her life for so long? I'm not going to go into details here, but suffice it to say that once again, this second book does not go in the direction I expected it to, which is exactly what happened in book one. That alone has made me stand up and take notice of Stone as an author. She clearly didn't want to give her readers a run-of-the-mill taboo story without making sure that the time we put into it was worth it to whatever degree. You will want to read the books in order, and fair warning: book two ends in a cliffhanger as well. I'm more invested this time around, so I'll be anxiously waiting for the conclusion to the Free at Last series. Four stars for A Losing Battle. ♥

Read my reviews for the Free at Last series:

Purchase A Losing Battle on Amazon.