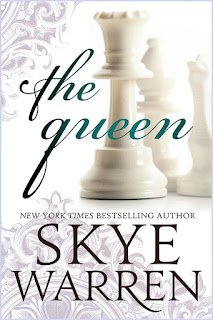 
It’s not only words that have truth. It’s touch. I cup his cheek in my hand, feeling his bristly jaw against my palm, taking his tension into my body. Then I curve my hand around his neck and draw him down.

A kiss. Is it possible to lie with your lips and tongue pressed together?

Is it possible to stand apart with your heartbeats attuned to one?

I’m not experienced enough to know, but the way he leans down to meet me, the way my body instinctively cradles his, it feels like a truth so deep I’m uncovering it instead of saying it.


Oh, Skye Warren, you certainly made the wait worthwhile! The Queen was everything that I could have hoped for from the sequel to The King. Okay, no. I take it back. This wasn't everything I had hoped for; IT WAS MORE. Gah! My expectations were in the stratosphere and Warren made sure that this series ender lived up to the series title. It was frickin' masterpiece, but then should I really be all that surprised? After all, this author blew me away with the Endgame books, from which this new set was spun off of. It was in that original series where we met Damon Scott and his Penny, but back then, we only got an inkling of how intense their story was going to be. You may be able to read this series independent of the first one, BUT I'm going to highly recommend that you read the Endgame series--The Pawn (which is currently available for free), The Knight, and The Castle--before venturing into Masterpiece territory--The Prince (which is the free prequel novella but is also included in the first full-length novel), The King, and The Queen. Why? Well, because there's a particular story arc that takes place in both series.

In The Queen, we find nineteen-year-old Penny at Smith College, pursuing her love of numbers while also opening herself up to other potential interests. She's left Tanglewood behind and as far as she's concerned, her only tie to her hometown is her father. Well, him and the enigmatic Damon Scott, who is nine years her senior. He insists that never returning to Tanglewood would serve her best, or maybe it's more of him needing the distance from the young woman who's not only tilted his world on its axis but knocked it off completely. He may seem as if he's got everything under control, but it's a facade at best. Penny has changed Damon, and it's a fact that someone appears to have taken note of. When Avery James goes missing, Penny learns particular secrets--one that had Avery making a choice that Gabriel Miller supported. They reap what they've sown, but it's Damon and Penny who are forced to deal with the aftermath. It's all a devious a game, one that Penny knows they need to win. It's time for them to go all in since anything else will cost them and neither one can afford to come out on the losing end this time around.

Okay, no more details. Seriously, just read the books. Again, READ THEM IN ORDER. Seriously, people. There's a reason why this author's most recent releases--i.e. the Endgame and the Masterpiece series--have gained such a strong following along with the stellar reviews they've received. I can't give more details than I already have--and at this point, I'm wondering if I may have already blurted out more than I should have--because this series and the one before it are the kind that need to be experienced while you're reading the books. What I will say is that I loved the fact Penny has come full circle in this book. The Penny we see here in The Queen is a far cry from the Penny we met in The Castle. She knows what she is capable of and she not only finds her footing by lays claim to the kingdom before her. I loved Avery James in the Endgame books, but Penny is in a class all her own. A line that I remember from my country's national elections in 2017 rings true for this young woman and her story: The last man standing is a woman. And Damon? He proved himself more than worthy of her. Five-plus stars for The Queen. ♥

Read my reviews for the Masterpiece series:

The King (book one) - five-plus stars - My Review

The Queen (book two) - five-plus stars - My Review (posted above)