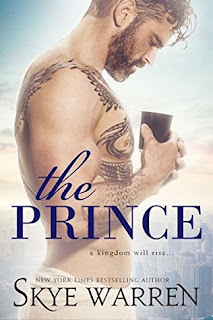 I’m so sorry, Daddy said. But I’m the one who’s sorry.

Because Damon Scott traded himself for me. He’s the only reason I’m safe.

And I’m the reason he’s not.

The Prince is the prequel novella to bestselling author Skye Warren's Masterpiece duet, which is a spin-off of her highly acclaimed Endgame trilogy, which is where readers originally meet Damon Scott, son of the demented Jonathan Scott, and Penny, the girl he puts in the care of Avery James and Gabriel Miller. In this prequel, Damon is a teenager on the run and Penny a little girl left to her own devices. Their paths cross, both of them living parent-less existences though due to different circumstance, both needing to survive. Their time together is brief but it's marked, to the point that someone has taken notice of the connection these two unlikely youngsters have formed.

Suffice it to say that "meet cute" would so not fit how Damon and Penny first find each other because there's nothing cute about their respective back stories. There's a ten-year age gap (one that I figured out AFTER reading The King, which is the full-length novel that follows The Prince). Damon here is the reluctant heir to his father's "kingdom", though "reluctant" is too mild a term for him. He wants nothing to do with his father, but if you've read the Endgame books, you'll know how things turned out on that front for Damon. On the other hand, Penny can barely keep tabs on her gambling addicted father who has a bad habit of incurring debts with nefarious elements.

This prequel is currently available for free on e-retailers, but it's also included in The King. You can choose to take a peek and get a feel as to what Damon and Penny's story will more or less be about by going with The Prince first. It certainly whetted my appetite. I already knew what happened to them later on, thanks to having read the Endgame series, and after having read this prequel, I was even more antsy to know what happened in between The Prince and The Castle. Skye Warren had me hooked and there's no doubt that she's going to reel me in and fillet my poor heart with all things Damon and Penny in The King and The Queen. The Prince garners five-plus stars. ♥

Download The Prince for free on Amazon | B&N | iBooks | Kobo.