Review: Barking Up the Wrong Tree by Juliette Poe (Sex and Sweet Tea #3) 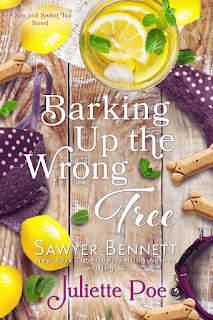 His wit and humor. His care and sweetness. His hotness. Oh, man... his hotness. His confidence in not only himself, but those around him. He's an affirming man, and he makes you feel good about yourself.

Yes, I'd come to realize that Jake was unlike any other man I'd ever been with. Frankly, it scared the hell out of me.

A sassy but sweet veterinarian, a sexy and smitten former footballer turned business mogul, and dog named Herman. Those were just three of the reasons why Barking Up the Wrong Tree, Juliette Poe's latest addition to her Sex and Sweet Tea series clicked with me. The other reasons why it's my favorite one in the bunch so far? Bestselling author Sawyer Bennett's alter ego taps into her Southern roots once again and gives a story that starts off with a hot hook-up and an unlabeled non-relationship, well, at least as far as the female main character was concerned. There's sex and romance, as per the expectations for romance readers like and as has been par for the course for this particular series, and let's not forget the theme of family and roots and the city-folk-falling-for-country-folk trope. But what sets this third book apart from the two that came before it was finely tuned humor and a strong story line that never pandered was as far from boring as it could get. This was a romantic comedy, but there was just enough angst and drama (I seriously got teary-eyed at one point) to satisfy my angst-addicted heart.

Laken Mancinkus is thirty and runs her own veterinary practice in her hometown of Whynot, North Carolina. Life in the big city--particularly, Raleigh--didn't turn out the way she thought it would, but life's been good so far back home. She's living life on her terms, focusing on her practice, spending time with her family, and keeping things as casual as possible with men who catch her fancy. When thirty-five-year-old Jake McDaniel comes looking for her at Chesty's, she has no clue just how much the hot guy is about to change her life. He may be hot and gorgeous, but he's got a few things against him, namely, his cheering for the wrong professional football team and his being a wealthy city slicker. However, Laken can't help but fall for the guy who takes care of a baby goat as if it were his child, hangs out with her grandfather, and goes above and beyond for those he are near and dear to his heart. He insists they're dating, but she's been there and done that, was promised the brass ring (or at least the one with a diamond atop a gold one), and had a broken heart instead. Can she give him--them--a chance to prove her wrong?

First things first: I continue to adore the Mancinkus family. From eighty-one-year-old Pap to the parents to all five siblings, this tightly-knit Southern clan tease and taunt but never question just how loving and loyal they are to one another. Laken was a woman who had a good head on her shoulders and her past experiences have made her into someone who no longer does relationships. On the other hand, Jake believes in relationships, so clearly, he's facing quite a few challenges in convincing Laken that they're worth taking a risk on. How do you make someone who holds firmly to her way of thinking that what they have is nothing like what she and her ex shared? Of course, helping them see the error of their ways is where the peripheral characters come in. There's Pap and Larkin, Laken's twin, as well as Jake's ex-wife. And there's Herman, Laken's dog, and can I say that giving Herman his own POV, as limited as it was, may have tipped the scales for the third Sex and Sweet Tea novel. I can't wait to see what awaits the remaining Mancinkus siblings. I just hope it's as fabulous as Barking Up the Wrong Tree. Five-plus stars! ♥

Read my reviews for the Sex and Sweet Tea series: