Review: Stubborn as a Mule by Juliette Poe (Sex and Sweet Tea #2) 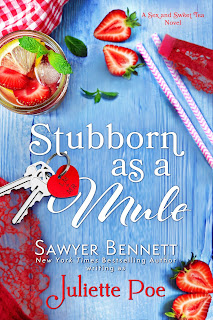 Juliette Poe--the Southern alter ego of bestselling author Sawyer Bennett--takes us back to the town of Whynot, North Carolina and sprinkles another fun and funny tale with sweet and sexy sass, just like she did with the Sex and Sweet Tea series starter, Ain't He Precious? With Stubborn as a Mule, things pick up where they left off between Lowe Mancinkus and Melinda Rothschild. Lowe isn't too thrilled over being ordered by a judge to work on Mely's house--the same house that previously belonged to the Mancinkus family--during whatever spare time he had. That's what happens when you nail the windows and doors shut and guard the house with a shotgun and then go on to paint part of the house in neon colors. Lowe has no plans of being a Southern gentleman towards his city-bred nemesis, but Mely's about to show him and townsfolk that when push comes to shove, she won't back down.

If you're already familiar with the town of Whynot, you should already know just how kooky some of the townsfolk are. It's a small town with its fair share of gossips and matchmakers and the Mancinkuses happen to be one of the more well-known clans around--but then doesn't everyone know everyone else in a small town? This enemies-to-lovers story was set in motion in the first book, and I went into this second one expecting to be entertained as much as I'd been previously. There's something special about this Mancinkus family that makes me want to get to know each one better. They're set in their ways and it looks like they're conquering those citified hearts that end up in Whynot and find love and home in the process. Just like in the first book, we have the country versus city angle going here, except with that added touch of enemies who wanted to both strangle and seduce one another.

I liked Lowe and Mely--although it did take me a tad longer to like the latter more than it did the former--and found their banter entertaining. There's a bit more to their story than you would expect, but I liked that I didn't see it coming because it made for an even more enjoyable read. As always, we get the story from the points of view of both Lowe and Mely plus a few select members of the Whynot population, and seeing things from the end of these townsfolk made it clear that they saw far more than our main characters (who were obviously blinded by their mutual dislike of one another). I appreciated getting peeks at Trixie Mancinkus and Rylan Powers in Stubborn as a Mule and where they were in their relationship as well as Lowe and Trixie's twin sisters, Laken and Larkin, and youngest brother, Colt. This second dose of Sex and Sweet Tea was a 4.5-starred winner and I can't wait for more! ♥

Read my reviews for the Sex and Sweet Tea series:

Purchase Stubborn as a Mule on Amazon | B&N | iBooks | Kobo.