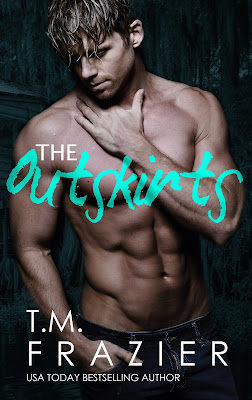 About The Outskirts
Sawyer wants a life of her own.
Finn wants to forget he ever had one.

After a tragedy, Finn Hollis escapes
into the swamp to be alone.
That is until Sawyer Dixon shows up,
all SCORCHING HOT innocence,
claiming she owns the land less than
fifty feet from his front door.

Sawyer gets under his SKIN, but even worse?
She makes him CRAVE things.
Things Finn hasn’t thought about in a very long time.

Finn WANTS Sawyer gone.
Almost as much as he wants her in his BED.

The swamp is about to get a whole lot HOTTER.

The Outskirts was originally set to be a standalone.
It is now book one of a duet.
The Outliers is the title of book two. 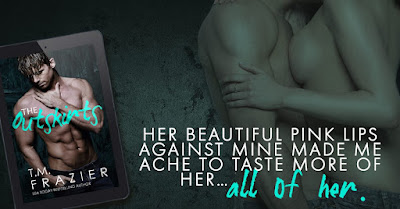 Read my five-plus-starred review of The Outskirts.

Add The Outskirts on Goodreads. 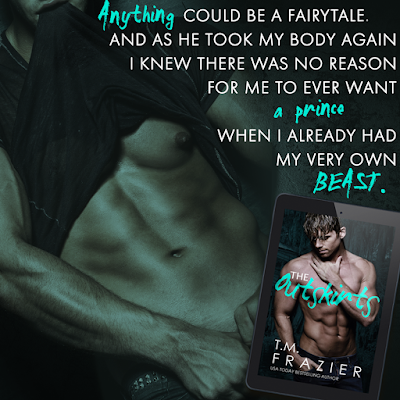 An Excerpt from The Outskirts
Sawyer

My throat tightened and a heaviness grew in my chest like my heart didn’t know whether to beat faster or stop beating altogether. “Did you leave me all this to show me the life you could’ve had, but didn’t? Why!?” I pounded the wheel again and then again, and again and again until my vision was blurry and all I could see was the redness of my own heated rage. “You’re a fucking coward! You fucking COWARD!” I screamed to no one, pounding on the wheel until the skin across my knuckles split and blood dripped between my fingers.

Strong hands bit into my biceps, yanking me from the cab. I was spun around by my shoulders and found myself face to face with Finn. “I like it when you swear,” he said, pressing close.

“Finn, get off me! Get off me! Let me go!” I wailed, struggling to free myself from his grip. Kicking out my legs only to connect with the air as he evaded my every move.

A growl tore from his throat. Finn picked me up and walked me to the back of the truck, setting me on the open tailgate. He pushed himself between my legs and hovered over me to keep me from leaping off.

“Let me go,” I demanded, pushing at his hard chest. “I don’t have time for your broodiness right now.”

Finn held my wrists together with one hand. “No, of course you don’t. You’re too busy tearing up pictures and screaming at no one.”

“No,” he said between clenched teeth.

“Just go! Leave me alone. Leave meeeeeee!” I wailed as I pounded against his stone chest.

“You don’t want to hit me,” he warned, his eyes hardened.

“Why?” He stepped in closer, unaffected by my attempt to fight against him. My inner thighs were touching his outer thighs.

“Because she did!” I screamed, my eyes sprang open to find his cold blue gaze. “She could have run anywhere and taken me with her. Instead she left him but she left me too. She was a coward who couldn’t make the right decision and I love her. I love her…but I hate her. I hate her so much…so…” I was interrupted when Finn’s lips pressed against mine, momentarily rendering me stupid. I pointed my toes toward the sky to avoid my initial instinct which was to wrap my legs around him. It was so consuming that I momentarily forgot to fight him off, but I didn’t need to, he pulled his lips from mine.

“Stop doing that,” I said. I pushed him off but he stayed between my legs, his hands on my bare back just under the hem of his big t-shirt I was wearing. His gaze hardened. I could see the conflict written in his lined forehead and the deep V between his eyes. I had no doubt the conflict had everything to do with me.

“It’s your fault that I do it,” Finn said, his voice deep and smooth against my chin and then my neck.

“So that’s your plan? Kiss me every time you want to shut me up?” I asked, still feeling every bit of my anger but also feeling something else. Something that sent tingles between my legs and an ache in my core. “Thank you for saving me. Really. Thank you. I appreciate it,” my voice cracked. “But you can just leave me alone now. And please, STOP kissing me.” My words a whisper.

“I’m going to kiss you whenever I want to kiss you,” Finn stated as if I didn’t have a say in the matter.

The early morning sunlight highlighted the beads of sweat trickling from his shoulders down his broad chest and across the valleys of his defined abs. He was standing so close that we were breathing in each other’s air.

“It’s when I’m pissed off at you that I want to kiss you the most,” Finn said, his voice flowing over my skin like a silky blanket. He slid me closer so I could feel the outline of his rigid erection as if he were proving a point. He lowered his lips to mine and consumed my mouth in a greedy kiss that had me shaking with need and spinning with confusion.

“Do you always kiss everyone you hate?” I asked, yanking my lips from his.

“Does this feel like hate to you?” he growled pushing his hard length between my legs. 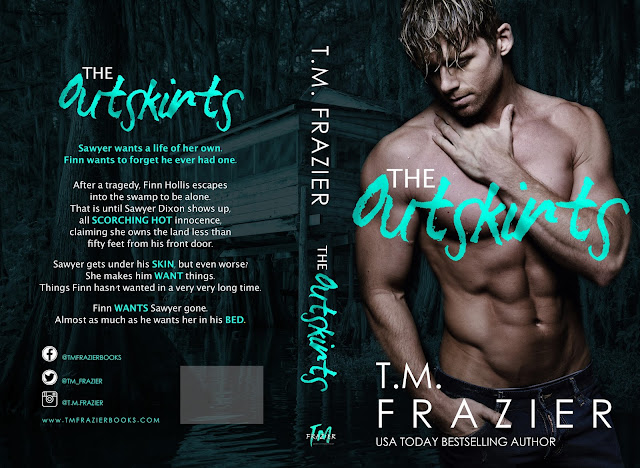 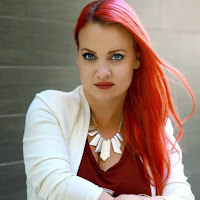 T.M. Frazier is a USA Today bestselling author. She resides in sunny Southwest Florida with her husband and her young daughter.

When she’s not writing she loves talking to her readers, country music, reading and traveling. Her debut novel, The Dark Light of Day, was published in September of 2013 and when she started writing it she intended for it to be a light beachy romance.

Well…it has a beach in it!