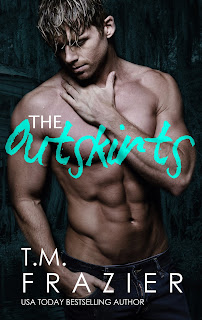 Finn was a lot of things. Highly irritable. Exasperating. A complete storm of negativity. But he was also selfless when it came to rescuing me and great at distraction.

So great in fact, that while he was kissing me, I'd almost forgotten that he hated me.

Well now, don't I feel stupid for never having read anything T.M. Frazier before today? Okay, okay. Save the tomato flinging, booing, and head-shaking, please. Clearly, my eyes have been opened to the error of my ways, all thanks to The Outskirts, the first novel in the author's duet by the same title. Intrigued from the very beginning and invested until the cliffhanger ending, Frazier left me wanting even more from her main characters, twenty-one-year-old Sawyer Dixon and twenty-five-year-old Finn Hollis and the almost-but-not-quite rundown town of The Outskirts, a swampy contrast to the far more touristy parts of sunny Florida. I will, however, bide my time until the release of the conclusion to this addictive duology which is entitled The Outliers and is set for a November release. But I digress (a bad habit of mine and one I fear I'll never break), so let the fangirling for The Outskirts commence!

Sawyer Dixon has turned twenty-one and is now saying goodbye to the mother she has lost, but it is also through her mother that she may be able to find the one thing she craves most--freedom. She leaves North Carolina and her abusive father behind, heading to a place called The Outskirts located in Florida, where a piece of land that her mother has bequeathed her with awaits. She already expects she'll get looks for her highly conservative clothing and her lack of knowledge when it comes to certain things, but what she doesn't expect is her new neighbor--the same neighbor who almost ran her over with his truck the night before. Finn Hollis doesn't want her around, his hatred for her making her want to avoid him. But it's not hate that Finn feels for freckled girl who's a combination of brave and innocent. These two will change each other's lives along with all those in the swamp they call home.

Sigh. How can two main characters have such development and growth in one novel and it's only the first in a promised two?! Sawyer and Finn start off with their limitations, hers brought about by ultra-conservative lifestyle her domineering father imposed upon her and his fortified by misplaced feelings of guilt over the loss of a loved one. Together though, they find their footing and it was like watching barren land come back to life after it's been nurtured and cared for. They challenged one another, pushing and prodding while also wanting to pull the other in even further. Finn certainly didn't make it easy to like him in the beginning, but then all it took was someone like Sawyer to look past the barriers and see the man who was worthy of loving. She calls him her swamp yeti, and it is rather apt. He was the beast that preferred the dark while she was the freckled beauty who led him into the light.

This was more than a story about a young woman breaking free from the shackles of her former life and a man learning to live without the burden of guilt weighing him down. Remember when I mentioned how this novel had me intrigued? That's because of certain revelations that come about in the last couple of chapters. With that cliffhanger ending, I can't help but get antsy. How will Sawyer handle the new truths that await her? Is her past about to make its presence felt in The Outskirts? How far will Finn go to protect the girl who's inspired his heart to beat even stronger than it ever did before? So many questions and now the two-month wait begins. I can guarantee two things: I will be working my way through T.M. Frazier's back list AND The Outskirts (and I highly suspect The Outliers) will be on my year-end list of best reads for 2017. I highly recommend this five-plus-star read. ♥

Purchase The Outskirts on Amazon.