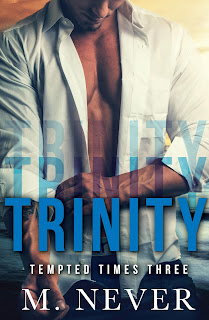 "I'm sure you know as well as we do how hard it is to find someone. It's even harder trying to find a connection with three. But when it happens, it's like a holy trinity. And we can't let a chance like this slip through our fingers. There's something special about you. Chase and I both saw it immediately. And we want to explore it."

Being the book whore that I am, I've read more than my fair share of books that have triad-style relationship in them, and admittedly, I tend to be wary because I need to be convinced that what's going on among the three people involved is equal and balanced in nature. What does that mean? Well, I want to be able to feel that one couple, and by couple I obviously mean two people, isn't more in love with one another than, let's say, when the threesome is together or compared to the other pairing. I've lost count of the number of times, I've read a book with a triad and found myself thinking that two people had more of a connection. But I've recently finished reading a novella that involved a triumvirate and I must say, it's probably one of the best ones I've come across, plus it had a new story line, one that wholly captivated me.

Jennifer Reeves is the twenty-four-year-old manager of the Corkscrew, and while she's a good bartender, she happens to be an even better cook, whipping up recipes that make the fare from the less than aesthetically pleasing's restaurant and bar's kitchen rave-worthy. When Shane Laughtner and Chase Hammond enter Corkscrew, Jenn isn't sure what to make of them. They're undeniably gorgeous, but she's pretty sure that they're a couple. So, when both Shane and Chase make it clear that as much as they loved the food, they'd love the idea of hooking up with her--all three of them together--the temptation is too much for Jenn to resist. But one night isn't enough for Shane and Chase. They want more with Jenn, but can Jenn really see herself with two men who just happen to work for the man wanting to close Corkscrew?

Shane and Chase together was sizzling, but add Jenn to the mix, and this triad came close to burning my poor e-reader to ashes. The fact that there was actually a story that was going on involving Jenn and the future of Corkscrew as well as her touching relationship with her mentor and father figure is why I loved this book. Sure, M. Never could have chosen to focus on the complexities of making a go of what many consider an unconventional relationship, but because she didn't and because she made the actual relationship simple in so many ways had me wanting to do a slow clap. Purchasing this novella was a no-brainer, and for the price, you get so much more than you may be expecting. Jenn, Shane, and Chase get my vote as best book threesome this year and maybe even one of the best ever. Five-plus stars for Trinity. ♥