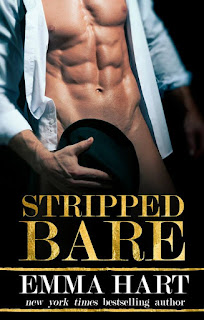 This. This is now my favorite Emma Hart book. A hot as hell male stripper who just happens to be the owner of the strip club he strips at and only does the whole stripping act for fun? A beautiful but jaded marketing specialist who plans her best friend's bachelorette shindig at a strip club and ends up reaping the benefits with a one-night stand with a gorgeous stripper? And then, as fate would have it, they meet again, only this time, he's the client and she works for him. Is this the sort of story that could possibly have me all a-twitter? Why, yes! Yes, indeed. Stripped Bare, the Stripped series starter, was lighthearted fare that had me smiling and giggling while still managing to get my heart fluttering at all the right moments. This isn't the first time I've read a novel about a stripper and the recipient of a lap dance or strip tease falling for each other, but this had enough original elements about it that allowed it to become a standout. This is the perfect book to curl up with this weekend. It's fun, flirty, and filthy--the best book triumvirate.

At twenty-five, Mia O'Halloran's taught herself to focus on what matters: her job. After a string of break-ups, she isn't looking for anything in terms of a committed relationship. She's happy spending time with her friends, and with one of them about to be hitched, Mia is fulfilling her maid of honor duties by taking them all to a strip club. When she ends up becoming the recipient of the hottest lap dance in the history of lap dances and then later sleeping with the gifted stripper, she chalks it up to what it was: a hook-up, albeit a very memorable one. Three weeks later, she finds herself back in Vegas, tasked to take charge of a big client: the owners of the same strip club she was at with her friends. When it turns out that one of the owners is the stripper who rocked her world, West Rykman, Mia knows they need to keep things professional. But how is that even possible when every time they're around one another, the temptation to do very dirty and delectable to one another is too much to ignore? However, when feelings begin to get involved, is Mia ready to risk heartbreak yet again? Because let's face it: that's how it always ends for her.

Mia and West were hot together, so there's no doubt that they've got the lust and passion quotient ticked off. But they're also sweet and funny, having nonsensical exchanges while also having more thoughtful conversations with one another. This shows that they aren't just about getting their rocks off with each other. There are genuine emotions that develop over the next few weeks they spend together, and they just seem to complement each other really well. These two were great to get to know in this book and have definitely become one of my new favorite fictional couples so far this year. Then there are also the supporting players, but while Mia's three best friends and her mother and an employee or two over at Rock Solid were memorable, it was Beckett Cruz, West's best friend and business partner, who stood out the most. I know his story is up next and that epilogue certainly has me curious about what exactly happened and how Beck is going to go about dealing with it. Stripped Bare was an awesome five-star read. ♥