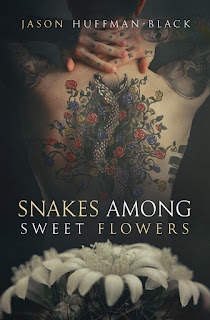 Jackson glanced at Cam, who had his brows raised at what she had just said. "You mean you're glad we're gay?" Cam asked.

"Well, now, that's silly. Like saying I'm glad you're left-handed or something, right? Just glad you found someone to love. We all deserve that."

A small town romance with two male main characters? Yes, please! The Jason Huffman-Black-penned Snakes Among Sweet Flowers was such a wonderful surprise of a read, with it's title inspired by a German proverb (at least according to Google) that goes, "Look before you leap, for snakes among sweet flowers creep." Ex-convict and unrepentant conman Camden Sanders knows all about snakes, especially those that have no qualms about striking at your most vulnerable. He's been a victim before. Nowadays, however, he's on the other side. It's how he's ended up in prison twice and how he continues to live his new life miles away from the hustle and bustle of Atlanta and away from the sadistic machinations of one man.

Hog Mountain may seem like a sleepy town, but Cam is ready to take advantage of the townsfolk, ready to take advantage of their trusting nature and naivete. However, one man plans to keep his eye on Cam, but maybe the fact that Jackson Rhodes looks mighty good in his police uniform and happens to be gay--albeit he's so deep in the closet, Cam may need a map--will make the verbal sparring and button pushing far more entertaining. But Hog Mountain and its residents are beginning to creep their way under his skin, making him feel as if he's a welcome member of the town. Then, just when he begins to feel at home, Cam's past returns with a vengeance and it has no problem taking as many victims as it takes to make Cam pay.

From the time I began reading this book till the time I lay my tablet down beside me, I had no clue how quickly time had sped by, proving that time does indeed fly when you're having fun. I was so thoroughly entertained by the quirky cast of characters and was engrossed by Cam trying to start over but still holding on to the remnants of his old life of running scams and taking advantage of of people who didn't know any better. His transformation is one that seems to have snuck up on him, not realizing how inculcated in small town life he's now become.  Then there's Jackson, who represents a profession that Cam doesn't trust, but who he can't help but be drawn to. Both men are trying to keep parts of themselves from public scrutiny.

This book isn't merely about Camden and Jackson's passive aggressive mating game--which was quite delightful to witness--but it was also about transformation, the kind that isn't limited to Cam and Jackson but to the town of Hog Mountain as a whole. There are lessons to be learned within the virtual pages of this beautifully composed tale, but they aren't shoved down your throat, choking you with self-righteousness. Just like the townspeople with Cam, this story that's full of heart--and yes, it's got a fair amount of heat as well--quietly and subtly creeps up on you, and it captured my own heart in the process. I adored Snakes Among Sweet Flowers and count it as one of my favorite reads for 2016. Five-plus stars. ♥