Review: Mine to Have by Jade Sinner (Claimed #1) 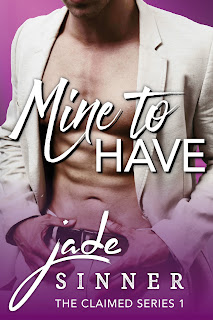 Jade Sinner appears to be on a roll this month, releasing three series starters, with the latest one being Mine to Have for the Claimed series. Based on the first two books I got to read from the author, I already knew what to expect and there's no question that giving readers quick, happily-ever-after, smutty stories is easy-peasy as far as Jade Sinner is concerned. Mine to Have gives us a fast read that has a taboo element to it, one that involves a nineteen-year-old college student named Lacy and her nearly thirty-year-old uncle named Max. Now, now. While Max is Lacy's guardian, he isn't actually a blood-related uncle. Blood-related or not, how they consummate their hidden and mutual lust for each other made for one hot read.

As always when it comes to short stories like this one, you know that you're going to get a guaranteed happily-ever-after. The lust part is a prerequisite for at least one of the characters, though not really the whole virgin aspect since I've already read a couple or so where the girl wasn't a virgin. Lacy and Max's situation is one, however, that I haven't come across in any of my recent quick smutty reads. Do I think that these two were in love with each other at the time of their, umm, coupling? Nope, but I don't doubt that they'd been fantasizing about one another sometime within the three years since they responsibility threw them together. Still, if you're looking for illicitness and erotica, Mine to Have is a four-starred pick. ♥

Purchase Mine to Have on Amazon.