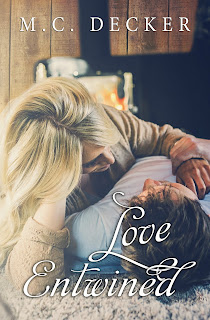 Note: This ARC was provided by Give Me Book Promotions in exchange for an honest review.

Love Entwined is a standalone contemporary romance novel and had a second chance love story written by author M.C. Decker. Based on the early reviews for the book, it looks like I'm in the minority with as far as my views and opinions go, because as much as I wanted to like both the story--I love second chance romances--and the cast of characters, I simply couldn't fathom enough enthusiasm for either one. I found it difficult to believe that this couple fell in love at the age that they did, went on to live very separate lives, and then met again nearly two decades later and then had all those feelings come back in a rush? I tried, I really did, but I couldn't suspend my disbelief as many times as I felt I was required to with this love story.

Ireland O'Brien and James Bentley Roberts met as children and went on to fall in love. When Ireland's mother dies, she's taken away, forced to live in a group home. Not knowing where Ireland was and after searching for her to no avail, sixteen-year-old Bentley's relationship with fourteen-year-old Ireland came to an end. Fast forward eighteen years later and Ireland is waiting to meet Jamie, her best friend's soon-to-be husband's best friend, and together they'll be part of the bridal party. But Jamie turns out to be none other Bentley, a successful architect and divorced single father with a teenage son. Their romance is rekindled, and they seem headed for their long-awaited happily-ever-after. That is, until fate intervenes...

There was this disconnect that I felt between the main characters and myself. Everything felt rushed and overly romanticized to the point of cheesy. I mean, I can deal with cheesiness, but the twist--which isn't really a twist since the prologue already lets readers know all about the accident and Bentley's memory loss--made it seem as if it was prolonging the agony even further. Then there was Bentley's reaction to discovering a secret Ireland was keeping from him. Hello? Seriously? First, the man seems to think proposing to women is some sort of ordinary occurrence. Then, he holds off on reaching out to Ireland even after things with his bitchy ex didn't work out. I'm sorry but I just had no positive feelings for the guy.

I was ready to give this book two stars, but I'm bumping it up to three for one simple reason: the epilogue. Yes, that epilogue was the one thing that made everything else that came before it worth it. The story had potential, so it's not as if it was absolutely terrible. I just didn't like how everything was on this fast track to a happy ending. There were gaps in the story and I really wanted Ireland and Bentley to get to know the adult versions of themselves for far longer than they did. I'm assuming, though, that that happened within all those missing parts in the story that were skipped over. But, like I said in the beginning of my review, I'm in the minority here, so feel free to read Love Entwined and then form your own opinion. Three stars. ♥