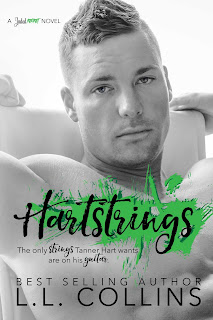 Hartstrings is the third and latest novel in the rock star romance series from bestselling author L.L. Collins, Jaded Regret, and it turns the spotlight on Tanner Hart, twenty-year-old bassist for the band and reigning manwhore of the group, a title he doesn't deny nor regret...until he meets fellow twenty-eight-year-old Mackenzie Shepard. For five years, Tanner and the rest of Jaded Regret have reaped the rewards of their hard work and God-given talent, one of those rewards being his ability to have any woman he wants, whenever he wants, and however he wants. It's nothing more than a physical thing to him. His heart isn't on the line, knowing far too well what kind of toll emotions can put on a person. He saw what love did to his mother, a woman who suffered at the abusive whims of his father and paid the ultimate price years later, and as much as he loved his twin sister, she left him, never to be heard from again. No, love wasn't in the cards for Tanner, no matter how envious he may be of his band mates who found and flourished in it.

When Tanner finds a battered and bruised woman suffering a beating at the hands of her boyfriend, he lets instinct take over. He wants to protect her, keep her from the harm he couldn't save his mother from and the harm his twin could have come to had she stayed. But years of abuse and not-so-idle threats have Mackenzie fearing for both her life and that of her father's. Her boyfriend loves her...doesn't he? But then why would he hurt her, leaving her with bruises, broken bones, and more? She tells Tanner that she isn't quite ready to leave. He doesn't understand, but he does offer her a lifeline: an open line of communication--one that also assures Tanner that Mac is okay--and a promise to be there whenever she calls upon him. Through calls and text message, Tanner and Mac forge a unique kind of friendship, but one that they need to keep secret, lest Mac's boyfriend makes her pay for it. They become best friends, but when feelings evolve, is Mac ready for another relationship and can Tanner offer her what she deserves?


Tanner, Tanner, Tanner. Gah! Out of all the Jaded Regret members, Beau Anderson remains my favorite, but Tanner Hart is second and only be the teeniest, tiniest of margins. He's a rock star and his life is exactly the way he likes it...only there are memories that continue to haunt him and a past that he can't totally outrun. Tan's got demons he needs to face and he finds a fellow abuse survivor in private investigator Mackenzie Shepard. Their friendship began in the most nightmarish of ways, but it was true and honest friendship, one that brought together two kindred spirits. Through their blossoming relationship, they find solace and support, acceptance and understanding, and provide each other the redemption that they never really needed since they were both victims of abusive individuals who were supposed to love them. I liked seeing the rest of Jaded Regret and how their relationships are going. I can't wait to read Exposed when it's released, which I hope won't be too long a wait! Hartstrings gets five stars. ♥