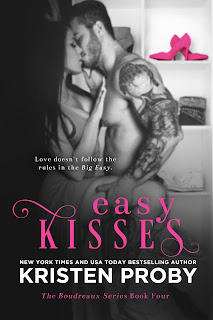 Easy Kisses is the fourth and latest full-length novel, but overall sixth release, in the Boudreaux series from bestselling author Kristen Proby. This story features Charlotte "Charly" Boudreaux, the middle sister in the New Orleans-based brood of six, who is fiercely independent, achieving success with her shoe store, Head Over Heels, and doing it separately from the family-owned business, Boudreaux Enterprises. Her life is all about her family and her work, so when her youngest sister signs her up for a retreat, she's wary, not sure if she should even be taking that much time away from her store. What does her sister even hope she'll get out of Lift? Once she's in Montana, though, she not only finds herself appreciating the life lessons she gets out of the retreat, but the place where it's being held allows her to appreciate the world around her and to take a breather from the hustle and bustle of life back in her home state of Louisiana. One additional perk? None other than the man behind the retreat, a gorgeous Brit named Simon Danbury.

Simon has never contemplated doing anything remotely inappropriate with a client of his, but his attraction to Charly Boudreaux is unlike anything he's ever felt before. His life coaching seminars, retreats, books, videos, and programs have made him a very wealthy man, and he has no intention of tarnishing his reputation by giving in to his want for Charly. There's only so much temptation he can resist, but one time isn't enough for either one of them. The want has evolved into need and being across the pond from each other is a challenge Simon is more than willing to hurdle for the woman that has so taken with. But though they're feelings for one another grow with each passing day--whether together or apart--both Simon and Charly are slow to trust. Charly has always held her parents love story as her ideal and she still isn't sure if Simon is the one she should entrust her whole heart to. On the other hand, Simon has already been manipulated and betrayed by his ex-wife. No one ever said falling in love would be easy...

There's just something about the male main character having an accent that appeals to me. I mean, I know I don't actually hear the words that are coming out of their mouth, but I can imagine it in my head, and swoon! Charly and Simon may seem like a couple with very simple demands and desires, but the fact is, they're complicated individuals, each one with their share of baggage. I loved Charly's independence and her love for her family and for her business. She stands up for what she believes in and doesn't let anyone--not even her family--steamroll over her. Then there's Simon, who is a true gentleman that doesn't like putting anyone down, not even his evil ex. Of course, for someone who teaches his clients the art of communication, the man should have done a better job communicating with Charly. Still, when these two are together, there's undeniable chemistry and the challenges they face merely make them stronger. I'm excited to read Beau and Mallory's and Savannah and Ben's books, respectively! Easy Kisses gets 4.5 stars. ♥