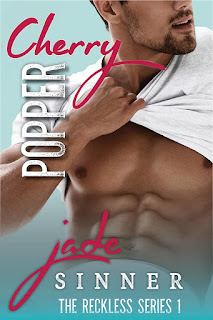 Cherry Popper is the first novella in the Reckless series from author Jade Sinner and it's short, sexy, and downright filthy but I mean that in a really good way. This is a falling-for-your-best-friend's-sibling romance, with twenty-four-year-old Benjamin Westbrook and seventeen-year-old Emma Briggs. Ben was six when Emma was born. He's known her all her life and for a good, long while, he saw her as nothing more than the little girl who tagged along, wanting to be where her older brother and his friends were. He doesn't see her for a whole year and when he finally sees her again, there's no hiding the fact just how much she's grown up. Ben wants Emma but is his need for her going to cost him her brother's friendship?

There's already an established friendship between Ben and Emma, so what they had certainly wasn't a case of insta-love. The age difference was wider than I expected, though I did like how it actually played an important role in the whole cherry popping episode. A lot of the interactions between Ben and Emma in the book are more of a sexual nature, so I was looking for a bit more romance from them so that there was a balance of lust and love going on. I would have also liked to see how Emma's family reacted to Emma and Ben being together, especially because Ben has been a constant in their home and important family events and gatherings. All in all, though, Cherry Popper was a satisfying quickie and one I'm giving four stars to. ♥