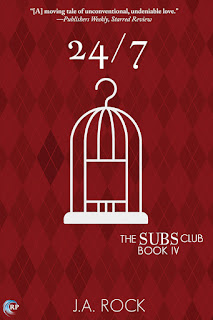 "I mean, there's not just one way to love. And being like in love--whatever that means--isn't even close to the most important kind, I think."

"I mean, what I have with my friends. That stays. Romantic love, that's...You can fall in and out of it. It's not very stable, or whatever."

"Are you telling me you've ever been in love with someone and then fallen out of it? Because if you did, you probably weren't in it in the first place."

Ermahgerd. I lerv, lerv, LERV J.A Rerck ernd Da Serbs Clerb! I do. I really, really do. This is one of those book series that is more than just about the obvious story arc of BDSM, with a focus on submissives. The four subs that comprise The Subs Club are anything but ordinary, each one touched in their own way by the loss of the fifth member of their circle via breath play gone wrong at the hands of an inexperienced dominant (and yes, I know that I'm using a lowercase letter for a term that's often supposed to begin with an uppercase one, but I never deemed the character in question worthy of the title). Now, we've reached the series ender and with it comes the story of the one who was closest to Hal and who still mourns his death and remains quiet about what happened but is nonetheless the most affected by it. Gould's decision to play with Kel and Greg, the married couple that owns the kink club where Hal died and approved the return of the man involved with Hal's death, still raises eyebrows, albeit more subtly than before. A year into it, Gould craves more than a weekend of careful BDSM play. He wants to be in servitude to Kel and, by extension, Greg. He feels ready to be enslaved, but what he is no longer ready for is to fall in love again.

24/7 is the title for this fourth and final book because of Gould's hope that what is now a weekends-only arrangement with Kel and Greg can transition into something more, with them being together for twenty-four hours a day, seven days a week, every other week. Kel has been encouraging Gould to share whatever's on his mind more, and while he has tried to share more than bits and pieces, he remains mum over his thoughts and feelings regarding Hal, Bill, and how Kel and Greg chose to handle the incident. Gould can't help but feel as if he's the only one who has remained faithful to the memory of Hal and what happened three years ago. He and his friends may have formed the Subs Club in order to seek justice for Hal and to start not just a conversation but actual reforms when it comes to how submissives and their Dominants interact while doing a scene and beyond, but Dave, Miles, and Kamen have all fallen in love with their partners and are preoccupied with their respective relationships. The Subs Club appears to have become nothing more than a social club, where they eat their snacks and engage in conversation, but nothing of late that can spark change in their community. Can Gould move on if he can't let go of the past?

I confess that I had never encountered a book that had the main characters involved in a Master and slave relationship before, so 24/7 was definitely an eye-opener for me. There were a couple of moments that I felt uncomfortable with what Gould went through. I, of course, took note that being in this sort of relationship was something that he desired and that he entered into it with his consent. I liked that the distinction between M/s and D/s relationships was made because that certainly helped me have a better understanding of the inner workings of both and what motivates the participants to want either one. But see, what makes this series and this book in particular special is that it isn't just about falling in love and finding that person that fits you. The Subs Club is, at its core, about friendship and Dave, Miles, Kamen, and Gould finding not just "the one" but themselves as well. 24/7 brought everything full circle and there was a tear in my eye in the last few chapters. The series is an all-time favorite and 24/7 gets five-plus stars. ♥