Release Blitz: Into the Nothing by BT Urruela 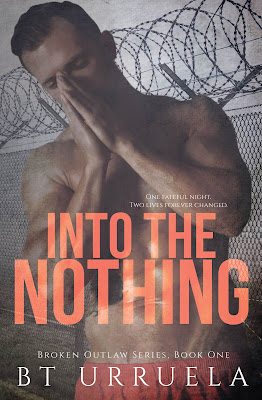 About Into the Nothing
Xander Evans has been on the road for many years. Never settling. Always moving from one place to another, unable to let go of his past. He lived a tragic childhood, spending most of those years in foster care. He's never felt like he's had a home. That is until he stops in the small town of Truman Valley, Missouri, where he meets a woman who will change everything he's ever known.

Paige Watson has it all. A loving family, beautiful home, and a great career. The only thing she's missing....is love. After escaping an abusive relationship, she opens her heart up to a stranger. He is unlike any man she's ever met. He came into her life and turned it completely upside down. Everything is perfect. That is, until one fateful night.

A night that would tear the Watson family apart, never to be put back together again.

A night that would send Xander away to prison for life. 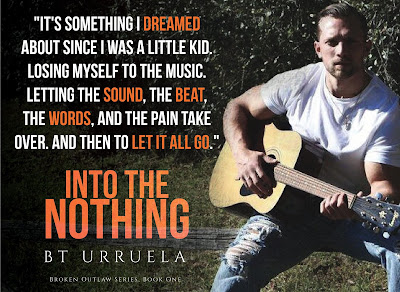 Add Into the Nothing on Goodreads. 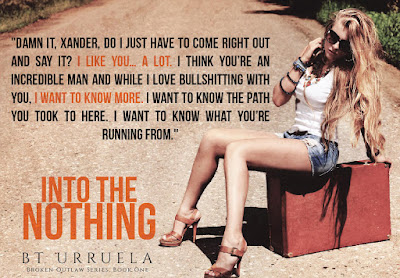 An Excerpt from Into the Nothing
"He was over here for like five hours last night drinking and talking with Dad. You think I like him? My dad's in love. And the way he didn’t hesitate to put Benji in his place, I just think Dad’s got a good feeling about him."

"Shit, I've got a good feeling about him too... and it's in my panties." She laughs and motions toward her crotch. "If I had been working and saw him do that to Benji's fat ass, I would've let him fuck me right on top of the bar…and I would’ve let everyone watch."

"Paige, don't tell me you didn't notice that anaconda stuffed into his jeans?"

"What?! What the fuck are you talking about? Anaconda? I wasn't looking at his damn jeans." I laugh, finding it hard to not to love this girl who has become like a sister to me. She's the craziest bitch I know, but she's got my back no matter what. She's had it since day one.

"Why wouldn’t you look at his jeans? That’s where his dick is!” 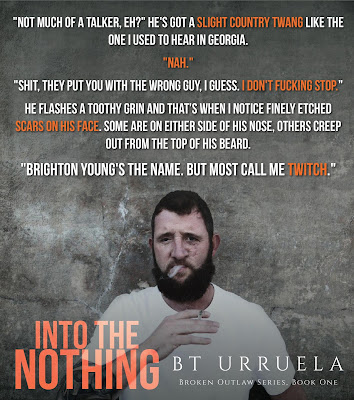 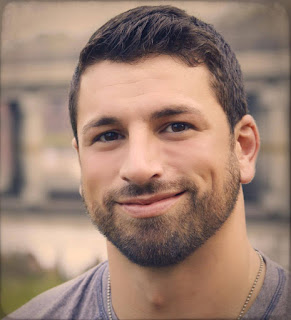 BT Urruela was an infantryman in the US Army from August 2004 until February 2011. At the end of a year long tour to Baghdad, Iraq, his vehicle was hit by two roadside bombs, which took his right leg below the knee and the life of his commander. He was awarded a Purple Heart for his wounds, an Army Commendation Medal, and Combat Infantryman's Badge. He medically retired from the Army in 2011 and moved to Tampa, FL where he currently works as a Director and Brand Ambassador for VETSports, a veteran community sports nonprofit he co-founded in 2012. He also conducts motivational speeches, works as a cover and fitness model and he's a personal performance trainer.

He co-wrote the military romance novel A Lover's Lament and released his debut solo novel, Into the Nothing, on June 21st, 2016.