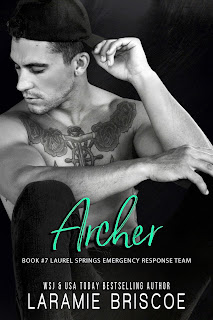 Note: An advance reader copy (ARC) was provided by the author via Give Me Books Promotions.
Archer is the seventh book in the Laurel Springs Emergency Response Team (aka LSERT) series from Laramie Briscoe. The titular character is Archer Grey, one of the newer officers on Laurel Springs, Alabama's police department. He's paired with Alisa Hilligan, another transplant to the small town and a nurse at Laurel Springs Medical. He's been trying for a while to get her to agree to go out with him, but it isn't until he lands in the emergency room with her tending to him that she finally sees a side to him that has her beginning to lower her guard. But when remnants of Alisa's past cross the border and make its presence known, Archer shall not hesitate to protect the woman he's falling for.
This was a pretty quick read--it took me about an hour or so to get through it--one with a sweet romance and a hint of suspense. Both Archer and Alisa have moved to Laurel Springs in hopes of planting roots, and they certainly had interesting back stories. But while the romance gets its expected happily-ever-after, and the whole suspense aspect is wrapped up satisfactorily, the issues that Archer and Alisa had with their respective families were pretty much unresolved. Now, that wouldn't really have mattered much had there not been scenes where the main characters were actively interacting with their parents. Yes, these scenes highlighted the dysfunctional familial ties Archer and Alisa had, but nothing ever came from either event. And as much as I love angst, there has to be a greater purpose for it. So all things considered, Archer garners three out of five stars.
-------------------------
Read my reviews for the Laurel Springs Emergency Response Team series: